Work begins on updating inventory of GHG from international shipping 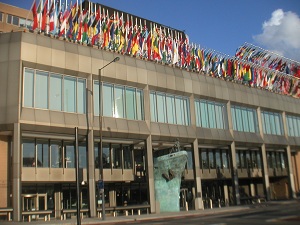 International experts are meeting at IMO Headquarters this week, in the form of an Expert Workshop, to begin work on updating the inventory of greenhouse gases (GHG) from international shipping, with a view to providing reliable and up-to-date information on which IMO, through its Marine Environment Protection Committee (MEPC), might base its work on further measures to reduce GHG.

The Second IMO GHG Study 2009 estimated that international shipping emitted 870 million tonnes, or about 2.7% of the global man-made emissions of CO2 in 2007. An updated GHG inventory is considered necessary as the current estimate contained in the Second study does not take account of the economic downturn experienced globally since 2008.  Exhaust gases are the primary source of GHG emissions from ships, with carbon dioxide the most important GHG, both in terms of quantity and of global warming potential. An updated inventory would also provide a baseline to enable the impact to be assessed of technical and operational energy efficiency measures for international shipping that entered into force on 1 January 2013.

The MEPC, at its sixty-fourth session in October 2012 endorsed, in principle, the outline for an update of the GHG emissions estimate. The Expert Workshop, meeting from 26 February to 1 March 2013, will further consider the methodology and assumptions to be used in the update.The Expert Workshop is expected to provide a summary of its deliberations as a report on its work to MEPC 65, meeting in May this year.

IMO has already adopted technical and operational measures to reduce emissions of GHG from international shipping.The Energy Efficiency Design Index (EEDI) was made mandatory for new ships and the Ship Energy Efficiency Management Plan (SEEMP) for all ships, under amendments to MARPOL Annex VI adopted in 2011. These amendments entered into force on 1 January 2013.

An article explaining the technical and operational measures already adopted can be foundhere.http://www.imo.org/KnowledgeCentre/PapersAndArticlesByIMOStaff/Documents/A%20new%20chapter%20for%20MARPOL%20Annex%20VI%20-%20E%20Hughes.pdf