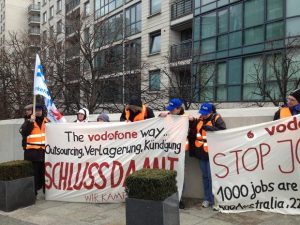 12 March 2013 – German workers whose jobs are under threat after a takeover by Vodafone, together with supporters from the ITF and UK unions RMT (National Union of Rail, Maritime and Transport Workers), CWU (Communication Workers Union) and Prospect demonstrated outside the company’s global HQ and flagship store in London on 11 March.

The protestors were members of Germany’s Eisenbahn- und Verkehrsgewerkschaft EVG (EVG) trade union, which represents railway and transport workers.   Johannes Kuipers, EVG union secretary for telecoms, said: “These workers are highly skilled communications engineers who help ensure the safe running of German railways. Following privatisation rail telecoms were taken over by Vodafone, who are now threatening to cut those crucial jobs. That is why they are taking their message that the jobs cuts have to stop direct to the heart of Vodafone’s operations.”

He continued: “Vodafone cuts jobs and redundancy payments. Its office in Eschborn near Frankfurt am Main has lost 750 jobs in three years. Now another 395 jobs are being relocated. Those who can’t relocate are going to lose their jobs. The company makes 3.4 billion euros a year in Germany but is trying to lower the redundancy payments to small handouts.”   ITF inland transport secretary Mac Urata added: “We support our colleagues at EVG in their fight to make skilled jobs secure in the face of this threat from Vodafone.“