London Gateway Say Fastest Way to Unload a Container Ship Is ‘Stig’ At It! 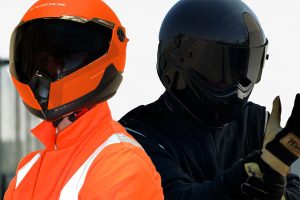 22nd March 2013, London:Some say he sleeps in the highest, darkest point of the gigantic London Gateway quay cranes, and some say reality exists simply because HE lets it….. All we know is; he’s called The Original Stig!

DP World London Gateway, the UK’s new deep-sea port and Europe’s largest logistics park, is delighted to announce The hottest event at Multimodal 2013. They will be bringing The Original Stig to Birmingham for the biggest challenge Multimodal has ever seen.

Using an exclusively designed quay crane simulator, visitors to London Gateway’s stand (640) will, for the first time ever, be able to exclusively challenge The Original Stig to a quay crane race! Following training from the Original Stig’s crane driver cousin, attendees will have the chance to go head-to-head in a challenge to see if they can beat The Original Stig at offloading containers from a container ship in a set time. Those who are victorious get an exclusive prize. Losers will get nothing but their name on the leader board!

When questioned about the challenge, The Original Stig said “…………..” and when asked if he thought he would actually be beaten, he said: “…..……”.  Undaunted by his menacing silence we asked if he felt London Gateway was going to be The place for the World to do trade with the UK, he nodded. Some might say that was an acknowledgement; others guessed he had an out of body race while we were talking to him!

The Original Stig will also be the guest of honour at the Multimodal VIP dinner sponsored by DP World London Gateway on the evening of 23rd as will Perry McCarthy. Perry will give the after dinner speech where he will confirm he is The Original Stig as well as sharing fascinating stories of his time as a Formula 1 racing driver. Dirt may well be dished!

Charles Meaby, Commercial Director of London Gateway, said, “Having The Original Stig leading this great challenge exclusively on our stand will be great fun. I know companies visiting from around the world will want to be part of Multimodal’s most talked about event. On a more serious note, London Gateway will play a pivotal and huge part of the UK’s trade with the world when it opens for business in Q4 and we look forward to meeting carriers, port users, shippers and cargo owners at Multimodal.”

Opening in Q4 2013, London Gateway will be the UK’s first 21st Century major deep-sea container port and Europe’s largest logistics park. Owned and operated by DP World and situated on the north bank of the River Thames, London Gateway will provide unrivalled deep-sea shipping access to the largest consumer markets in the UK. The port’s location, with its superior operational systems and service, will ensure ships load and unload as fast as possible, making London Gateway a world class asset for the UK.

DP World operates over 60 terminals across six continents(1), with container handling generating around 80% of its revenue.  In addition, the company currently has 11 new developments and major expansions underway in 9 countries.       DP World aims to enhance customers’ supply chain efficiency by effectively managing container, bulk and other terminal cargo.  Its dedicated, experienced and professional team of more than 30, 000 people serves customers in some of the most dynamic economies in the world.

The company constantly invests in terminal infrastructure, facilities and people, working closely with customers and business partners to provide quality services today and tomorrow, when and where customers need them.       In taking this customer-centric approach, DP World is building on the established relationships and superior level of service demonstrated at its flagship Jebel Ali facility in Dubai, which has been voted “Best Seaport in the Middle East” for 18 consecutive years.

In 2012, DP World handled more than 56 million TEU (twenty-foot equivalent container units) across its portfolio from the Americas to Asia. With a pipeline of expansion and development projects in key growth markets, including India, China and the Middle East, capacity is expected to rise to around 103 million TEU by 2020, in line with market demand.       www.dpworld.com