New gallery by the Thames at Battersea revels in Chinese contemporary art and launches its latest show for dynamic artist Le Guo, By James Brewer

Chinese contemporary art needs space to breathe – and a young gallery by the Thames in Battersea is giving it just that. At just two years of age, the Hua Gallery located at Albion Riverside, a gleaming glass piazza designed by Foster & Partners, has already featured a strong series of exhibitions in what at 2, 000 sq ft is said to be the largest gallery in London for this type of art.

Hua – which in Chinese means painting– staked an impressive position at the acclaimed, recent Art13 show at Olympia, as part of its response to what it calls growing demand for fresh and innovative art from China. Founder and director, Shanyan Koder, has a goal of presenting “cutting edge, stimulating works by established contemporary Chinese artists, as well as emerging contemporary Chinese artists who are not as yet ‘discovered’ internationally.”

In addition to her gallery, Ms Koder runs a company named Chelsea Bespoke, which advises on international sourcing, commissioning and creating art and design pieces for the home.

The latest artist to feature at Hua seems a good match for the criteria set by Ms Koder of artistic individuality, creative symbolism, and bringing forth emotional energy. He is Le Guo, who was born in Gansu province, north west China – but has lived in London for just over 20 years.

Two of his large works immediately draw the gaze of everyone who visits his exhibition, which is entitled Momentary Suspensions (until May 29 2013). They are Multichrome painting – Yellow, Lemon and Emerald; and Multichrome painting: Teal. Both decant generous amounts of ink and pigment onto paper, and it is tempting to make a figurative reading of the abstract result. The first could be a reference to a riotous tropical forest, while the teal  rendering might call to mind the turbulent blue-green of the sea. This is to be too specific, however.  The whole is a fluctuating vision, for as Le Guo has said: “I have a desire to narrate, but am unable to form a story” in his artistic reaction to the physical world. 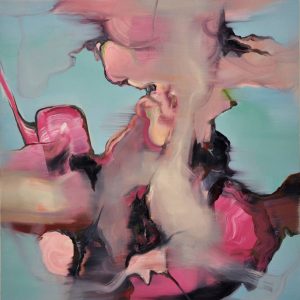 Dismantle Mindscape No. 1, Oil and acrylic on canvas, By Le Guo

In fact, Le Guo describes his style as “impulse driven work” shifting between chance and control, influenced by eastern philosophies of Zen Buddhism and Taoism (the religion of yin and yang). He lavishes colour on injecting life into amorphous shapes, “investigating the variability of space and the endless possibilities it provides, ” as the catalogue says, offering a multitude of visions. It is what he calls ‘performative’ art. We are told that “sometimes he uses brush, sometimes parts of his own body. Other times it is only through subtle movements of the paper that pigments spread all over the space.”

Contemporary in style, he nevertheless reaches back a millennium and a half for an apt summary of its essence:   qiyun shengdong which means “spiritual resonance and lifelike motion, ” as called for by the sixth century influential painter and critic Xie He.

Le Guo gained his BA in Fine Art in China and later an MA in Fine Art at Central Saint Martins College. A solo exhibition at the Barbican Centre in 1990 set him firmly on the London scene, and paved the way to further success. Looking back home, he is much encouraged by the flowering of contemporary art during the last 20 years of China’s open door policy and economic growth.

Hua Gallery already has a substantial future programme: scheduled next is Between Spiritual and Material Spaces: the Photographic World of the Gao Brothers  (June 5  to September 5 2013) which will feature dramatic photos, a preview of which was offered during the Art13 show. The Beijing-based brothers, who themselves experienced events of the Cultural Revolution, explore social issues and the complex nature of human beings.