Around 400 guests from over 15 countries attended the 110th Annual Dinner of the Institute of Marine Engineering, Science and Technology (IMarEST) on Friday 22 March in the Great Hall of London’s historic Guildhall.

The dinner marked the first public duty of the 111th President of IMarEST, Andreas Chrysostomou, who committed himself to three goals including global growth and expansion of IMarEST.

“It is internationality that I would like to make one of my three goals during my tenure and I pledge to spread the word of the institute in every part of the world and promote the values, goals and ethos of the IMarEST” he said. 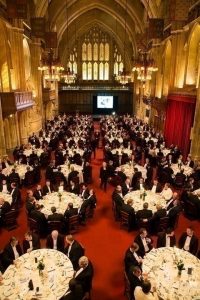 A panoramic view of the dinner

“The second goal is to personally mobilise a membership-wide action to increase the membership of the Institute and I pledge to bring in at least 111 new Members this year as I’m the 111th President of the IMarEST. I will arrange that this is shown on the institute’s web page to show you my determination.”

Mr Chrysostomou then commented on his third goal of fostering community among all IMarEST members across the globe stating; “I strongly believe that people who feel closer to each other can be stronger and more successful in achieving their goals and usually they achieve these in a more efficient and effective way. I believe in togetherness, transparency and, above all, friendship – that is why I had a reception tonight, open to all Members and that’s why I will have open communication [with you all] any time you would like to talk to me.”

A presentation of the President’s Commendation Award was made to Robert (Bob) Barnes, a Marine Surveyor specialising in small ships and craft who has been a Member of the Institute for over 40 years, for his chairmanship of the IMarEST Small Ships Group which has addressed education in the understanding of boat stability, and especially the effect of retro-fitting cranes. He co-ordinated a successful campaign to rectify government legislation regarding the adoption of FAME-free bio fuels to meet environmental regulations for irregularly used craft such as canal boats and yachts. The Small Ships Group under his leadership has also delivered training courses for yacht and small boat surveyors. 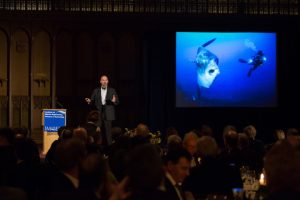 Additionally, the evening saw the Honorary Fellowship (the highest distinction the Institute can offer), awarded to Rear Admiral (Rtd) RNLN Ruurd Lutje Schipholt KLN OON, who has also been an IMarEST member for over 40 years, and has had detailed involvement with INEC (International Naval Engineering Conference and Exhibition), one of the institutes leading industry conferences, including serving as patron for several conferences.

Marine biologist and television broadcaster, Monty Halls, a former Royal Marines Officer, now an explorer and writer, delighted the audience as the after dinner speaker. He recounted several stories of his expeditions when filming both on and below the sea in his quests around the globe, providing a dynamic, stimulating and amusing end to an incredible event. 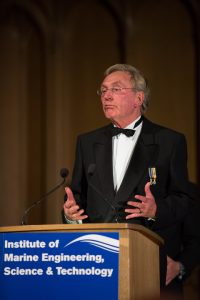 “It was a spectacular evening bringing together IMarEST members, industry, academia, regulators and military from home and overseas in unparalleled surroundings, ” said David Loosley, Chief Executive of IMarEST. “Holding the Annual Dinner in the heart of the ancient City of London provided a link with the Institute, for its headquarters have been within the fabled ‘Square Mile’ for virtually its entire 124-year history. Our global reach was highlighted by the number of international guests, cementing the institute’s commitment to being the leading learned society for all marine professionals.”

Donations were also collected from guests for the Guild of Benevolence, which raised over £1000, to support individuals from the marine community, and their dependents, who are in need.

Video footage of the 110th Annual Dinner is available on the IMarEST website at www.imarest.org and via the Institute’s YouTube channel.

About the 111th President

Andreas Chrysostomou has been Senior Marine Surveyor and Head of the Maritime Policy, Multilateral Affairs and Standards Division in the Department of Merchant Shipping, Government of the Republic of Cyprus since 2004 and Chairman of the Marine Environment Protection Committee (MEPC) of the International Maritime Organization (IMO) since 2003.

On the international stage, Mr Chrysostomou has worked with UN agencies and other forums including UNCTAD, ILPO, COPASS-SARSAT, the International Oil Pollution Fund and the International Mobile Satellite Organisation.  He has presented papers and chaired seminars and conferences around the globe and is a member of the Board of Governors of the World Maritime University (WMU).

In 2011, Mr Chysostomou received the acknowledgment of his peers with the 2011 Award for outstanding contribution to sustainable shipping and was presented with the Outstanding Public Service Award by the US Department of Homeland Security, US Coast Guard for his contribution to international shipping, and in March 2013, was awarded the Greenship Technology Leading Personality of the Decade Award.

The IMarEST is the leading international membership body and learned society for all marine professionals. It is the first Institute to bring together marine engineers, scientists and technologists into one multi-disciplinary professional body. With 15, 000 international members based in over 100 countries, it is the largest marine organisation of its kind.

The IMarEST is a respected authority in every maritime country. It is a Non-Governmental Organisation at the UN International Maritime Organization (IMO), has special consultative status with the Economic and Social Council of the United Nations (ECOSOC) and is a nominated and licensed body of the Engineering Council (UK), a member of the Science Council and has significant links with many other maritime organisations worldwide.

What next after the Cyprus saga?