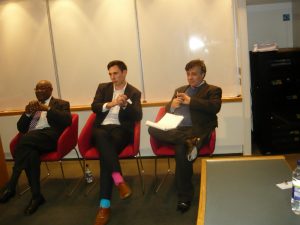 In a bare mud-walled dwelling in a Niger Delta fishing village far from the nearest hospital or professional care, a 22-year-old woman laboured agonisingly three years ago to give birth to her first child. At around the same time, the often deadly conflict over oil exploitation in Nigeria was about to deliver one of the world’s most flagrant smuggling rackets. The woman survived, and subsequently had a second child, but the family along with their fellow villagers remain trapped in roverty.  The newborn trade in illegal oil is thriving and has been characterised by one expert as “the biggest international crime at the moment in terms of cash.”  As the giant oil companies and federal government struggle to stamp out massive thefts of oil by militants and gangs, the mix is explosive. 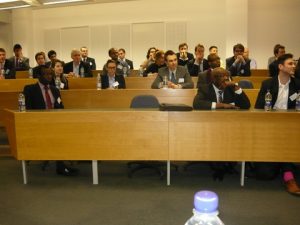 The west side of the amphitheatre

With the human dimension dauntingly on the agenda, the latest meeting of the London-based business network Afrimari learnt in graphic detail of the heart-stopping clash of interests. The gathering questioned how anyone could halt the descent into further misery for the Delta region’s 30m inhabitants and the loss of control by the oil and gas sector over a significant portion of its output. Introducing what turned out to be an impassioned audience debate, Gemina Cooper, co-founder of Afrimari, posed the question: “How much accountability do the maritime, and oil and gas industries, take?” 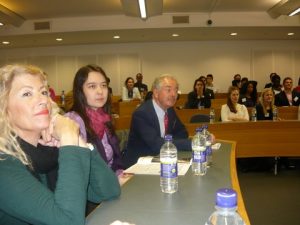 Anny Zade, Oxana Andrienko, James Brewer and the centre part of the amphitheatre

First, the 100-strong attendees the viewed the compelling Delta Boys, filmed by American director Andrew Behrends. He took his camera to a lowly village and a militants’ camp, just ahead of the declaration of a national amnesty, which today is looking more fragile than ever. We witness the hand-to-mouth daily life of most villagers, and shudder at the harsh discipline imposed by rebel leaders on their followers. A gun-wielding militant tells Andrew Behrends as he enters guarded territory, “say only what you see – don’t add or subtract” and that is what the filmmaker does. The message from many is: “We must be empowered by our own oil.”

After the documentary showing, guest speakers described how oil theft is running at record levels – it may be costing Nigeria $24bn annually. Most of the nation’s output, 1.9m barrels a day, is exported through legitimate means, but perhaps 150, 000 barrels (the finance ministry’s estimate of 400, 000 is said to be a wild exaggeration) escapes ‘through the net.’ The illicit commodity is piled in drums on to local barges, put through makeshift refineries, and shipped to transfer points where open-market tankers speed it to the Far East and to African nations. Some of the barges are said to have capacity for 40, 000 barrels worth. Sometimes gangs dynamite company pipelines, so that oil flow can be diverted. 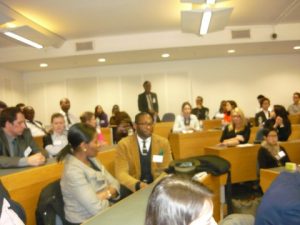 At the receiving end, it was said that there is only one government in the world that keeps records of discharged crude oil, and that is the United States. European nations now expect advance notice of crude discharges, but most of the smuggled oil is going to the opposite side of the world, and some to destinations on the African coast.

It was suggested that one way of curbing the trade could be for ship inspections to be carried out just beyond Nigerian territorial waters. Shortly before the Afrimari event, hosted by the Commodities and Shipping Society at Cass Business School, it had been revealed that Royal Dutch Shell is suspending flow at its 150, 000 barrel-a-day Nembe Creek pipeline while it rips out illegal taps that have siphoned off an estimated 60, 000 barrels of oil a day.

Nigeria is the fifth lagest supplier of oil to the US, and eighth largest oil exporter on the planet, but the average person in the 70, 000 sq km Delta region lives on less than $1 a day, without access to good schools, roads or hospitals. Flaring pollutes the ecosystem at the mouth of the Niger Delta.

Things have moved on since the film was made, when the freedom fighters, as they proudly described themselves, were chiefly setting out to sabotage oil installations. 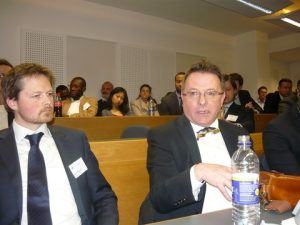 Jonathan Bearman, managing director of ClearWater Research Services, an oil industry consultancy, said that following the amnesty, “many of the ex-militants are now sitting in power. Many of them have become big businessmen. They have property in Lagos, they have property in Abuja, and they are off with the president on a visit to China.”

Mr Bearman said: “The boys on the ground are saying, what do we get out of it, we get nothing. We could be heading into another period – my bet is that it is going to get worse before it gets better, “  said Mr Bearman, who spent many years in Nigeria.

As to revenue that was supposed to be going to the government, “I could give you figures showing the level of waste – you would be horrified. This is going the way of Colombia, it has become a massive criminal organisation, but in oil rather than drugs. A lot of people are collaborating in this theft, ” said Mr Bearman.

With the drain of revenue (oil has been said to account for 80% of government income), Nigeria could run out of money in the next few years, and there would be some sorting out needed at a governmental reform level.

Oil was illegally leaving Nigeria in large quantities, said Mr Bearman. If you are able to track where the oil goes you can fight that kind of traffic and you are removing the funds that are causing the criminalisation of the Niger Delta.

There were social projects all over the Delta region from Shell and others, but the government says that companies should not be playing a surrogate role. When federal money had been spent most of it had gone not to problem areas in the north east or northwest. It had been spent in the south, but as with the cash from stolen oil, “it is going to meet the needs of local leaders and politicians and ended up in property in Lagos and Abuja.” 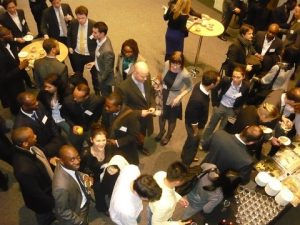 Of the scale of the theft, Mr Bearman said: “You have stolen oil refineries, stolen oil rigs, and people do it moving around, creating instability. How do you begin to unpick this growth of criminal, commercial activity in the Delta?  It is going to be very hard to do, I am sure.” Included in this complex matrix, there was “a real squabble over the proceeds of the whole business, ” said Mr Bearman.

Joseph Croft from Stakeholder Democracy Network , said he had spent much time on the creeks, which was about as close as local people got to the glittering lights of the massive oil plants. The underlying problems were still there, and the amnesty process was beginning to unravel. The process, which was costing about $500m a year, would hold another 18 months up to the election. “What happens next is a big problem.”

Mr Croft said that companies were thinking of leaving Nigeria, “but they want the reserves. There is nowhere else [for oil] like the Niger Delta.  There is 25% of the global reserves.”

Stakeholder Democracy Network has a stated aim “to empower those that have been worst affected by the activities of extractive industries, to help them to get a better deal.”

Mr Croft said that under current national programmes, things could improve for about 5, 000 people, but “what happens to the other 30m people in the Delta who are living under these conditions?” The only way to create jobs was to look beyond the oil industry and shipping industry, which were specialised. Those involved with corporate social responsibility should be investing in other value chains, and not just agriculture: examples were communications, and construction. “Can we start thinking about future economies?   How do you help the young I have met there, to give them a chance? That is the future role for CSR in the Delta.”

Captain Eddie Agbakoba,   a marine consultant, said it was the job of the Nigerian government to act on the problem. He said that out of 60 years of Nigerian independence, the military ruled for 34 years. Now the country had a proper civilian government “so let us give them time.” He added, though: “You can never run away from the kind of corruption there is in Nigeria – it is really enormous.”

Capt Agbakba said that the movement in the Delta had mutated.  It had been purely a political movement.  There were criminals, whose main job was kidnapping, sometimes in collusion with the security people. “How do you make these people stop? I don’t know, ” said the master mariner, who spent six years in command of merchant ships, 11 years in the Nigerian Maritime Administration, and 15 years in the maritime safety division of the International Maritime Organization.

John Faraclas of www.allaboutshipping.co.uk asked how this chaos had come about in a country calling itself a democracy – was this the kind of situation that needed the United Nations to step in? Democracies had failed to flourish economically compared to what had gone on under some dictatorships, he said, underlining that he was not in favour of military rule. 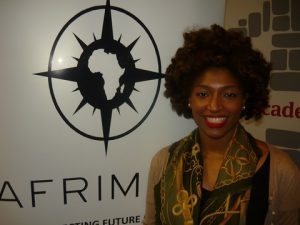 Shell, operator of a joint venture with Nigerian National Petroleum Corp which produces nearly half of all oil there, reported its temporary pipeline shutdown after it found 90 illegal connections in the system. In the swamps and creeks of the Delta, hundreds of small-scale, rough refineries have been destroyed, and suspected oil thieves are arrested daily, but many people continue to defy the government because this activity is one of the few ways of making money after pollution has ruined fishing and farming. Nigeria’s oil is light  gravity and low in sulphur, which makes for ease of refining.

The website Stop the Theft quotes figures that 180, 000 barrels per day are stolen, and says that those behind it constitute the 12th largest oil producing group in Africa and generate revenue that exceeds the gross domestic product of 15 African countries.

Andrew Berends, who made the documentary, was arrested, detained for 10 days and expelled from Nigeria, in a bid he says to suppress coverage of the Delta conflict. He insisted in the film that despite high-level political decisions, the root causes of the conflict were never addressed.

Temi Binitie, a co-founder of Afrimari, warned that there was a self-perpetuating situation in Nigeria, with the young people saying “it is a way of life. The industries we work in should ask what can be done as a sustainable and effective way of dealing with the situation.” Ms Binitie stressed the importance of “giving something back” to the local people.