A magnificent mural by artist Bernice Tackley lauds the engineering wonder that is the historic Anderton Boat Lift on the River Weaver in northern England, By James Brewer

One of the greatest maritime engineering feats along England’s extensive inland network of waterways is abidingly celebrated in a large outdoor mural by the painter Diana Bernice Tackley.

Bernice was blessed with an unexpected inspiration for her tribute to the Anderton Boat Lift, which was built in 1875 to raise and lower cargo craft the 50 ft between the elevations of the River Weaver and the Trent & Mersey Canal. The boat lift resembles, in the colourful words of its operator the Canal and River Trust, “some giant three storey high iron spider.”

It is one of only two working boat lifts in the UK, and was in use for more than a century until it was closed because of corrosion in 1983. Restoration started in 2001 and the boat lift was re-opened the following year.

Bernice, who has been in the news as a winner in the TV series Show Me the Monet, told us about the circumstances that made her mural happen. “If I hadn’t married my second husband, John, in 2005 and been inspired by a visit while on honeymoon to the wonderful heritage murals in the town of Chemainus on Vancouver Island, then the mural at Anderton Boat Lift, might never have been painted.”

The murals that have since the 1980s brought distinction to the Canadian community depict industrial scenes from the days when steamers called at the town’s wharf, and activities including logging, mining, rail transport and retail stores. “The most striking of all the murals, ” said Bernice, “was painted by Paul Ygartua who had been a student at Liverpool College of Art at the same time as me in the 1960s. This featured three large portraits of two First Nation chiefs and a native Salish woman, and I returned to the UK with this image buzzing around in my head.”

As Bernice and her husband were involved in fundraising for the restoration of the Anderton Boat Lift, at Northwich, Cheshire, she was inspired to paint similarly commanding portraits of the three key people who created the original project.

She makes use of what she describes as a genre painting to tell the story of volunteers presenting a petition for the restoration of the boat lift to No 10 Downing Street, adding elements like the visitor centre where much of the fund raising was achieved, and the working boats on the river. At the time, John was a trustee of the Anderton Boat Lift Trust. After the lift was officially reopened by Prince Charles in 2003, “I was fortunate to be asked to paint the mural as a lasting gift from the trustees to the Anderton Boat Lift site, ” said Bernice.

The mural, which measures 8 ft by 30 ft, features the three engineers primarily involved in the design and the construction of the edifice in 1875 and its major conversion in 1908. The left hand figure is the initiator, Sir Edward Leader Williams (he was also chief designer of the Manchester Ship Canal). The central figure is Edwin Clark, who was in charge of detailed design and construction. On the right is Colonel JA Saner, chief engineer to the Weaver Navigation Trust in 1908, who was responsible for the major rebuild. 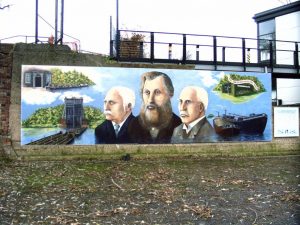 The surrounding images illustrate volunteers presenting a petition to Downing St, demanding the restoration of the lift after its closure in 1982, and a collection of narrow boats which were the most common craft to use the lift. Those boats often travelled between the Potteries on the Trent & Mersey Canal and the River Mersey with pottery, and in the opposite direction with raw materials. Shown on the right is a 40’ container, converted, manned daily and used as an information centre on site prior to the restoration; and below are typical River Weaver boats known as flats, often loaded at Anderton and capable of carrying heavier loads than the more versatile narrow boats. 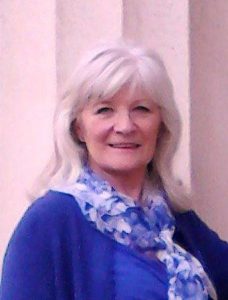 The mural was commissioned, said Bernice, as a tribute to the three great engineers and to the many thousands of enthusiasts and volunteers who would not let the lift die and who fought long and hard for many years for its restoration for future generations to admire and enjoy.

Much groundwork went into creating the mural. Bernice first had to submit a scaled version to the local planning department and to gain approval from English Heritage. She painted the mural in her studio over 12 months, on seven panels of coated aluminium. “There was a lot of preparatory work to be done, first to the surface which was rubbed down and coated with primer. The design was squared up; something I hate doing normally as it is so time-consuming. The paints were Italian exterior acrylic paints mixed especially for me by a retired ICI paint chemist, Dave Evans. Each panel was varnished for protection. As I worked on each portrait I began to joke that I was sharing my husband with three other men… from history. It seemed that the eyes of the trio followed me around the studio as I became increasingly fascinated by their faces.”

Bernice continued: “Because of the limited space in my studio I could not put all the panels together there, so I never saw the completed mural until it was installed on site. Each panel was slid along rails which were attached to the wall and amazingly everything lined up, with only a small amount to touch up.”

The unveiling ceremony, on a bright March day in 2010, was attended by 100 guests and was performed by Frances Done, who is chair of The Waterways Trust, a charity which promotes the educational, social and environmental benefits of inland waterways, and chair of the Youth Justice Board . “As the tarpaulin fell to reveal the mural I could only look at the faces of the guests who I am pleased to say gasped with obvious delight, ” said Bernice.” This was a heart stopping moment but one of which I felt very proud. This marked the final action of the Anderton Boat Lift Trust, which was largely responsible for the motivation of the lift restoration.” The trust was dissolved that year on the full achievement of its purpose.

An accompanying exhibition of Bernice’s paintings in the marquee was devoted in part to the making of the mural, and she has since had two further solo exhibitions at the Anderton Boat Lift.

Opposite the marquee is the site of the Winnington Chemical Works – incidentally, where polythene was ‘discovered’ in 1933 – now owned by Tata Chemicals Europe. “During the weeks I spent looking at the industrial scene I became drawn to its potential as an interesting painting. However, what really drew me to the scene was the illuminated steam at night and I was very grateful to a friend who supplied me with some excellent photographic reference material. The resulting painting entitled ‘Nightshift’ was selected from 3, 000 applicants for the BBC2 programme Show Me the Monet, and was exhibited at the Mall Galleries. This has been another turning point in my artistic career, as I have since produced a series of atmospheric industrial landscapes. These scenes are located along the inland waterways in the Northwich area, and John and I were often to be seen in the early hours of the morning photographing the various sites for reference. We must have been on every CCTV in the area! One of the paintings I am hoping to do this year will again be the Winnington works, this time with some of the older craft moored along the quayside.”

Some people have commented that Nightshift looks like a montage. “That is not the case, ” said Bernice, “but I have been thinking about developing montage and I would like to explore this further.” This attraction may stem from her time as a designer (“I guess there still is the designer in me when I paint”) during which she sold her creations for wallpaper and furnishing fabrics internationally and the UK.

Although fascinated by industrial scenes, such work is part of a much broader palette unsurprising for a person who has had a versatile career “as a wife, mother, designer, fashion commère, fine artist and broadcaster.”

Since taking part in the second series of the Show Me the Monet programme, 20 of the participating artists have formed a group called After the Monet, had a successful group exhibition at the Coningsby Gallery in London W1 and are planning another exhibition in the capital in the autumn.

“Ever since I turned 60 and married in the same week, it has proved to be quite a remarkable time in my life and a turning point in my career as an artist, ” said Bernice.  “I am now preparing for my open studio weekend on May 25 and 26, preceded by a group exhibition of Cheshire artists at the Marburae Gallery in Macclesfied from April 19 to May 18. I am also organising an art trail for the Festival of the Arts in Northwich (FAN) for the whole of June when some 50 shops in the town centre will display a total of 200 paintings.”

Later in the year Bernice will travel to Pennsylvania and Las Vegas, a visit that looks likely to result in further dramatic paintings. Said Bernice: “Who cares about the gambling? I can’t wait to see all those wonderful night time scenes of illuminated cityscapes! “