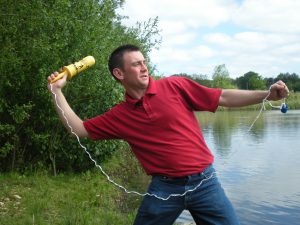 A life saving device, which has helped to rescue hundreds of yachtsmen, is celebrating its 40th anniversary.

The Balcan Emergency Life Line (BELL) was launched in September 1973 and has since that day remained the fastest, easiest to deploy and most accurate life saving device on the market.

Designed to overcome the shortcomings of lifebuoys and throwbags, the BELL range hasgrown from one product to three devices, offering quick deploy lines of 40 and 25 metres.

All the BELLs feature a lightweight, heavy-duty plastic capsule, which when thrown releases a high strength polypropylene line with a breaking strength of 260lbs (118 kg).

The first BELL – the BELL Pro is designed for use in harsh environments and has a range of 40 metres.

The BELL 40RP offers the same range and high strength line as the BELL Pro but with the added benefit of a repackable line, allowing it to be stored neatly when not in use.

The latest addition to the range is the BELL 25 RP. As with the BELL 40RP, the 25RP can be repacked in minutes and has been designed for use where a 40 metres range is not required.

“Whenever you are on the water or near water, an accident is never far away, ” says John Rinfret, inventor of the BELL. “Saving someone who is stranded is all down to time, the sooner you can get a line to them, the better the chance of rescuing them. It struck me that whilst they are commonplace, both lifebuoys and throwbags are heavy, difficult to throw and cannot reach people more than 15 metres away. I looked at these products and their failings and this inspired me to create the BELL.

“The BELL is simple to use. Just remove the cap on the handle, keep hold of the rope’s grip and throw. As the capsule flies through the air, the high strength line is deployed. All the stranded person has to do is keep hold of the line. As people are weightless in water, once someone has hold of the BELL it is easy to pull them to safety.

“The BELL has been a great success, being used in numerous successful rescues and after extensive testing by the Royal Navy the BELL was recognised for its quality by NATO, which allocated it a stock number (NsN) meaning it can be used by armed forces teams across the world.