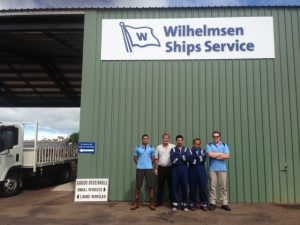 Wilhelmsen Ships Service (WSS) has expanded and upgraded its premises and service station facilities in Darwin in direct response to market demand for the Life Raft Exchange (LRE) programme.

Geoff Brown, General Manager for the Northern Territory and South Australia said: “This new facility in Darwin will service vessels operating within the region’s growing offshore and oil and gas market.  The new premises are well placed to supply and exchange rafts in major resource ports in Australia’s North West Shelf, including Dampier, Port Hedland and Broome where our fixed-fee Life Raft Exchange concept has been proven to save our customers time and money”.

The Darwin service station has increased its workshop capacity and staff to enable it to service in excess of 1000 rafts per year and opened officially in March.

With no capital outlay, annual service cost or short term raft hire, the Life Raft Exchange (LRE) concept ensures customers have access to predictable pricing with no surprises. WSS’s global network of international offices and service stations enables vessels to exchange liferafts in every global region and the LRE program continues to grow in popularity, due mainly to its simplicity and the convenience it gives customers.