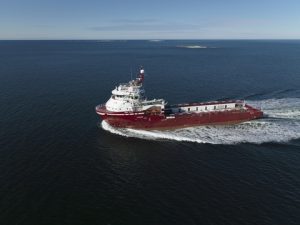 April 4, 2013 – ABB, the leading power and automation technology group, today announced that the first vessel to feature Onboard DC (direct current) Grid has been delivered to Norwegian offshore owner Myklebusthaug Offshore by Kleven Yard. The system will allow the ship to operate at the highest energy efficiency level to minimize emissions.
The Platform Supply Vessel (PSV) “Dina Star, ” designed by Norwegian company Marin Teknikk, is 93 meter long with deadweight tonnage (DWT) approximately 5000 ton and will serve as a multipurpose oil field supply and construction vessel in the North Sea. ABB supplied the Onboard DC Grid system, including all power, propulsion, automation and advisory systems.

In traditional electrical propulsion vessels, multiple DC connections are made to thrusters and propulsion drives from an alternating current (AC) circuit, accounting for more than 80 percent of electrical power consumption. ABB’s Onboard DC Grid represents a breakthrough for the maritime industry in optimized propulsion by distributing power through a single DC circuit providing significant power savings.

“We are delighted that the first vessel equipped with ABB’s Onboard DC Grid system has been delivered and are confident its performance will provide Myklebusthaug Offshore with a competitive edge, ” said Veli-Matti Reinikkala, head of ABB’s Process Automation division. “We are also looking forward to the opportunities ahead through Dina Star’s built-in capabilities to utilize supplementary onboard power from renewable energy sources.”

ABB unveiled the Onboard DC Grid concept in mid-2011, with a pilot project contract following six months later. The concept has attracted high levels of interest from ship owners operating a wide range of ship types, namely offshore, tugs, jack ups, ferries and yachts. For the time being the DC Grid is available in low voltage with an installed power up to approximately 20 megawatt. By distributing electricity in DC, the system allows the operation of the generators at a variable speed and consequently at the optimal specific fuel consumption. This is particularly beneficial for offshore vessels operating in Dynamic Positioning (DP) mode, where average power demand is low.

The DC Grid configuration also means bulky AC switchboards and propulsion transformers are no longer required. This, combined with greater system lay-out flexibility, increases the available space and deadweight for cargo.
Norway-based Kleven shipyard has a long tradition in shipbuilding and is specialized in sophisticated work boats. The company has a focus on innovative and efficient solutions and has delivered 60 vessels in last seven years.

ABB (www.abb.com) is a leader in power and automation technologies that enable utility and industry customers to improve performance while lowering environmental impact. The ABB Group of companies operates in around 100 countries and employs about 145, 000 people.

Safety Data Sheets for Chemical Tankers – an information paper for the industry.