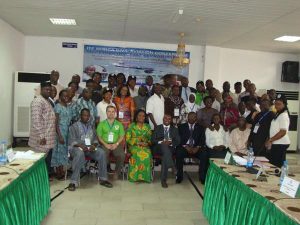 5 April 2013 – Delegates at the ITF Africa civil aviation conference on 14-15 March 2013 in Lagos, Nigeria discussed the increasing instability and fragmentation of the industry and unanimously backed the International Civil Aviation Organisation (ICAO) working paper on the negative impact on the industry of continued liberalisation.

Delegates deplored the lack of initiative by governments and their sometimes close collusion with employers over liberalisation policies which threaten jobs, make employment more precarious and increase violations of freedom of association and the right to collective bargaining.

They resolved to support the ICAO paper’s objectives and to work in collaboration with other partners to promote them. They also called on the ICAO to ensure that all its member states are encouraged and facilitated to organise and conduct country dialogues and sessions to popularise and promote jobs and industry sustainability.

ITF Africa regional secretary Joseph Katende said: “This was a very useful opportunity to discuss the changes in civil aviation in Africa and how they are affecting our members. We were also able to define our priorities for the next four years, such as building unions through recruiting young, women, precarious and informal sector workers and improving our communications with each other through more effective use of ICT and social media.”