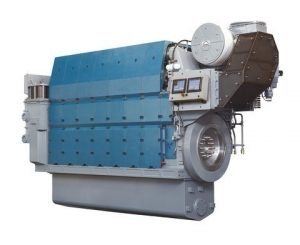 Topaz Energy and Marine, a subsidiary of Oman-based Renaissance Services SAOG and a regional leader in providing offshore support vessels and engineering services, has passed yet another milestone in its 35-year history by building two Anchor Handling Tug Supply vessels.

The two 67-metre, ’80-ton bollard pull’ vessels are ready for anchor handling tug supply services and the transportation of dry and liquid cargo to and from pipe-laying barges, drilling platforms and production platforms for offshore operations. The Topaz Dignity will operate on behalf of BP, the oil and gas major, on a long-term-contract basis in the Caspian Sea – whilst Topaz Triumph may remain in the Middle East and be operated by Topaz Marine MENA. The state-of-the-art vessels are equipped with the latest technical equipment and are custom-built for Fi-Fi Class I and DP2 operations. 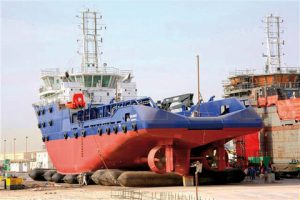 The “Topaz Dignity” on the slipway

Performance Upon completing seatrials for the Topaz Triumph – Topaz Marine, Project Manager, Stewart Smith, expressed his satisfaction with the propulsion system and vessel performance in general: “Everything fulfilled our expectations. Compared to the estimated design speed of 13.5 knots for the vessel, we even achieved a radical increased top speed of 15 knots”. Additionally, a bollard pull test verified the vessels’ pulling power specification by achieving a test result of 87 tons.

About Topaz Energy and Marine

Topaz is a leading oilfield services company providing marine and engineering solutions to the global energy industry with a primary focus on MENA and the Caspian Sea. Headquartered in Dubai and with more than 35 years of experience in the Middle East, Topaz operates 98 offshore support vessels, and Topaz Engineering engage in shipbuilding, ship repair, and offshore construction and maintenance activities. Topaz is a wholly owned subsidiary of Renaissance Services SAOG, a publicly traded company on the Muscat Securities Market, Oman.