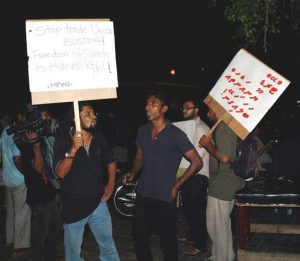 The ITF is making a fresh effort to bring the long running dispute involving dockers in the Maldives to a close.

The dockers section secretary has written to the new CEO of Maldives Port Ltd (MPL), a 100% government owned company, calling for management to end what’s been described as a campaign of abuse against workers, and to reinstate those workers sacked in 2012, seemingly purely as a result of their involvement in trade union activities.

The letter from Sharon James reads: “We have written several times to the President of the Maldives requesting him to intervene to resolve this matter. The union has been contacted by the Policy Secretary within the government who has assured them that the issue of reinstatement is being considered positively.

“The MPWU has also met with the management of your company and we welcome this as an indication that there is a willingness to find a positive outcome. However, time is of the essence and we urge you to act swiftly to bring this dispute to an end as soon as possible.”

Find out more about the background to this dispute and show your support for the MPWU.