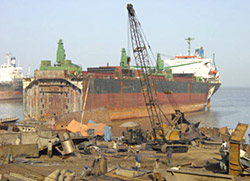 Brussels/Strasbourg, 15 April 2013 – More than 30 European NGOs have signed a petition calling on the European Parliament to support the creation of a Europe-wide ship recycling fund, an economic incentive to finance the environmentally sound recycling of end-of-life ships and to internalise the costs of proper hazardous waste management, which are too often borne by developing countries. The petition, which was sent today to Members of the European Parliament and permanent representations of the EU Member States,  was signed by the NGO Shipbreaking Platform’s global member organisations as well as other leading European NGOs amongst which the Bellona Foundation,  the European Environmental Bureau, Greenpeace, the International Federation of Human Rights, Mediterranean SOS, Transport & Environment, Seas at Risk, Waste Free Oceans, etc. The NGO Shipbreaking Platform is a global coalition of 18 environmental, human rights and labour rights organisations promoting safer and cleaner ship recycling practices worldwide.

The European Parliament is set to vote on the ship recycling fund this Thursday, 18 April and will also vote on the ban of beaching, a practice whereby end-of-life ships carrying hazardous materials in their structure such as asbestos and PCBs are dumped on developing countries’ beaches in India, Bangladesh and Pakistan. The EU regulation would be the first supra-national legally-binding rule which prohibits beaching.

On 26 March, in a breakthrough vote, a large majority of Members of the Environment Committee of the European Parliament (ENVI), across all political groups, had voted to create the fund. All ships calling at EU ports, including ships flagged outside the EU, would pay a fee into the fund, which will disburse premiums for safe and sound ship recycling in certified and EU-listed facilities. The fund should eliminate the price gap to substandard facilities located on beaches where shipowners currently obtain the highest prices for their end-of-life ships, and streamline the costs for proper recycling throughout the operational life of the ship.

Moreover, ENVI voted to outlaw beaching, the polluting and dangerous practice of breaking ships on tidal beaches and asked for ship recycling on impermeable floors. Last year, at least 15 workers died in the shipbreaking yards of Bangladesh alone. The international community has agreed to replace beaching by safer and more environmentally sound ship recycling methods.

The NGOs also call on the EU Member States, who will discuss ship recycling this week in the Environment Council, to keep end-of-life ships under the scope of the United Nations Basel Convention on the Control of Transboundary Movements of Hazardous Wastes and their Disposal. In November 2012, the NGO Shipbreaking Platform and several legal experts argued that the EU ship recycling regulation in its current form violates the EU’s and Member States’ obligations under the Basel Convention and the Basel Ban Amendment as it seeks to unilaterally legalise the export of end-of-life ships built with asbestos, heavy metals or PCBs to non-OECD countries.

The Hong Kong International Convention for the Safe and Environmentally Sound Recycling of Ships, 2009 (Hong Kong Convention), which puts obligations on ship recycling facilities, flag states and recycling states, will most probably not enter into force within the next decade. It does not cover downstream waste management nor does it offer steps for a transition towards safer methods off the beach. Therefore, political decision-makers should not rely on this future convention only. Under the international Basel Convention, to which all Member States and the EU itself are parties, and under current European law (Waste Shipment Regulation) ships sold for recycling are considered hazardous waste, the export of which from the EU to non-OECD countries like India, Bangladesh and Pakistan is currently illegal. There can be no unilateral decision that ships are not hazardous waste: only the State parties to the Basel Convention can decide on this matter, which they have not.

Protecting watchdogs across the EU: proposal for an...

These sorry excuses for men sold a perfectly good bond in order to buy an annuity (Met Life)for me which I did not tell them to buy and in fact told them I didn’t think I wanted. Fortunately I became aware of their perfidy and made them cancel the Met Life deal, but they they could not get my bond back. Needless to say, I am now in another brokerage and basically managing my own funds, gradually trying to get together a portfolio that represents my interests rather than those of some AG Edwards wheeler-dealer, and, of course, paying some of the tax consequences of their actions. May they suffer boils and any other plague I can think of.