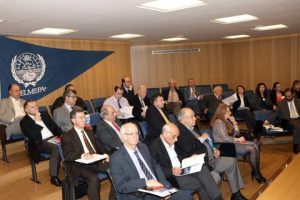 A view of the General Assembly

HELMEPA’s 31st General Assembly of its Members was kindly hosted by member-company CERES at its building in Piraeus on Thursday, 11th April 2013, in the same place in which the Association was founded 31 years ago.

With HELMEPA’s Chairman, Dr. John Coustas presiding, together with Secretaries – Mr. S. Dafermos from Avin International S.A. and Mr. S. Stylianos from Andriaki Shipping Co. Ltd, the Association’s Director-General Mr. Dimitris C. Mitsatsos presented the activities completed with the consent of the Board of Directors during the year 2012. 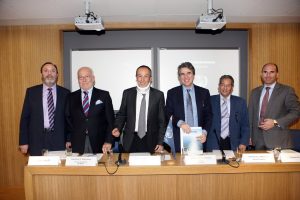 HELMEPA’s Chairman, Treasurer, Director General, legal advisor and the secretaries at the conclusion of the General Assembly.

The Assembly unanimously approved the activities and financial status as presented by the Auditors, Moore Stephens. The Board of Directors and the Auditors were relieved of every management responsibilities by the Assembly, which also erased four Members due to non-payment of outstanding contributions. In addition, in accepting the proposal of the Board of Directors and according with the Articles of the Association, the Assembly announced the following Honorary Members: 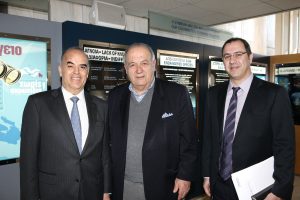 Thanking the Members, the Chairman underscored the fact that HELMEPA’s messages must reach each Greek man and woman so that the seas – our national treasure – can be protected. Indeed, he encouraged those present to assist in efforts to attract new members.

The event came to a close with the screening of a DVD produced by the Australian Maritime Safety Authority (AMSA), to which both AUSMEPA (the Australian Marine Environment Protection Association) and HELMEPA contributed and that was funded by HELMEPA Founding Member, Mr. G. Hadjieleftheriadis. The DVD aims to update crews on board ships sailing to Australia about the need to protect its sensitive ecosystems and the currently enforced relevant legislation. 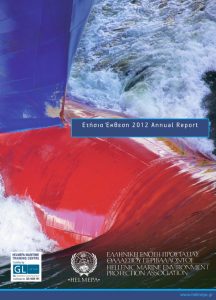