The 2011 European Commission’s White Paper “Roadmap to a Single European Transport Area – Towards a competitive and resource efficient transport system” states the European Commission’s goal of reducing greenhouse gas emissions by at least 60% by 2050 (in comparison with 1990). One of the means to achieve this goal is by facilitating a modal shift from road to rail or waterways for distances longer than 300 km by optimising the performance of multimodal logistics chains. 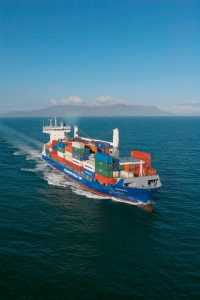 As one of Europe’s largest multimodal operators with a large fleet of 45ft containers, Samskip Multimodal says that the relaxation in weight restriction will allow its customers to transport four tonnes extra, in turn stimulating growth of combined transport. It therefore fully supports the European Commission’s proposal to revise the „Maximum Authorized Vehicle Weight“ article from only allowing 40ft ISO containers to including 45ft containers to carry 44 tonnes.

Samskip operates one of Europe’s largest multimodal container logistics systems. The Samskip system is able to move containers door-to-door between over 30 countries from Russia, Scandinavia, Poland, the Baltic States, Finland and Iceland in the north to Spain, Portugal, Italy, Austria, Greece, Hungary, Czech Republic and Slovakia in the south and centre of Europe.

Samskip offers a wide range of routing options, utilising road, rail, sea and inland waterways as appropriate to provide the best combination of rate and transit time to suit individual customers’ requirements and preferences. It now has at its disposal over 13, 000 containers, ranging from 20ft to 45ft pallet-wide high cube containers including reefers, curtain-siders and flat-racks.