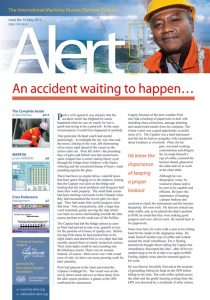 Dealing with the menace of fatigue

The current issue of the International Maritime Human Element Bulletin Alert! provides all the connections required to link issues of fatigue to the safe manning of ships and the way they are operated. After many years when the industry has been hesitating about the problem of fatigue, suggesting that so much about this menace has been ‘anecdotal’, the realities provided by real evidence now illustrates that it can no longer be ignored.

This issue, which begins with a cautionary Case Study of the background to the grounding of a short sea ship with two officers working watch and watch, is packed with advice about fatigue and how it can be sensibly countered. Noting there is still no mathematical formula for the assessment of a ship’s manpower requirement, the bulletin offers a seamanlike ‘rough guide’ to The Guidelines for the Determination of Minimum Safe Manning, taking into account the hours of shipboard duties and what might be described as ‘peak workload situations’.

Stemming from the EU-funded Horizon Project which sought to simulate the deterioration of performance as fatigue sets in, a fatigue-prediction software model MARTHA has been developed, along with a Fatigue Risk Management System, to assist managers to optimise operations and work schedules to moderate and minimise fatigue. Alert! No 32 also describes another useful tool in the US Coast Guard’s Crew Endurance Management System, which provides a very visual indication as to when crew endurance is being ‘stretched’.

It has been suggested that part of the problems stemming from the insidious onset of fatigue was the lack of any meaningful tools to assess and to counteract it. The centrespread of No 32 provides a whole list of downloadable aids to fatigue mitigation and management which can go a long way towards informing management about the realities of fatigue and its effects. It also makes clear the shared responsibilities of ship designers, owners and managers, along with seafarers themselves, for informing themselves about fatigue. This is an important reference document that illustrates a wealth of information on this important problem that continues to contribute to maritime accidents of all kinds.

Advice is also provided on the use of riding gangs aboard ship, noting that these additions to those aboard a ship cannot be used to bypass the regulations that apply to a ship’s crew.

The Alert! Project – launched in October 2003 – is a campaign to improve the awareness of the human element in the maritime industry. This is a Nautical Institute project, sponsored by the Lloyd’s Register Foundation.

Further information about the human element awareness initiative, and electronic copies of Alert! can be found at www.he-alert.org.