Marta Boros aligns her pop art with a woman’s view of the world , By James Brewer

Warsaw-born Marta is making her name in London at a time when, as she says, “people are buying more and more pop art. Contemporary design and art is taking inspiration from pop art.  Look at Swedish art, look at American contemporary design.”

Many of her heroes have never been more popular: Andy Warhol, Roy Lichtenstein, and Tracey Emin for a start. In particular, one can see how she must have been influenced by the approach of Tracey Emin, who famously describes her practice as one of disclosure, using her life events as inspiration, and whose website refers to her work as having “an immediacy and often sexually provocative attitude that firmly locates her oeuvre within the tradition of feminist discourse.”

Woman. Acrylic on canvas and collage By Marta Boros

Marta shares boldness in graphic images with Lichtenstein and Warhol. The difference is that her images are of unqualified honesty rather than parody. She sometimes includes extracts from her poetry on the canvas. In her paintings that tend to the autobiographical, she might add her own words or those of celebrated people, especially Stanisław Witkiewicz (1885 –1939), often known simply as Witkacy, who was renowned across the fields of painting, poetry, plays and novels.

She adds: “Francis Bacon, Isadora Duncan and various poets from the Romantic era inspire me. I read a lot of biographies of famous people. Artists, ” she says, “should also have great personalities.”

Self-portrait, Acrylic on canvas and collage, By Marta Boros

Talk of the giants of the immediate past and the present is not to obscure Marta’s particular talent, which embraces a conscientious and scrupulous approach to her subject matter. “My art is very contemporary, and what it is about can be summed up in three words: love, inspiration and beauty, ” she says. “The symbol for my art could be pink roses, ” and indeed roses feature in her often segmented works, along with disembodied voluptuous lips; these stimulating symbols occasionally offset by figures of males who seem ominously predatory of women. The viewer feels as though eavesdropping on pages of an impulsive chapter in an exuberant life.

As Marta sets about her work, there is aural pop in the mix: she lends a sensitive ear to the music in particular of Jarvis Cocker. She hangs on to the words of the Pulp singer that are “very poetical, reflecting his interest in how women think. I like his views. I find a lot of myself in his songs.” She was impressed that the singer was curator for the 2007 music, art and performance Meltdown Festival at London’s South Bank Centre. When it is not Jarvis Cocker on her music player, it is often the Scottish-American “alternative rock” band Garbage, which features the forthright singer Shirley Manson. 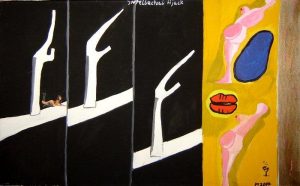 Intellectual Game, Acrylic on canvas and collage, By Marta Boros

In her earlier years she paid close attention to the post-impressionist master Cézanne (as did Lichtenstein) and his still life output. That and life drawing was a feature of her six years at art college, when she paid homage to the expressionist tradition, from her early years of study being a very good realistic painter.  Her portfolio includes some impressive charcoal drawings. As her creativity has flourished, she has turned to a more primitive style. 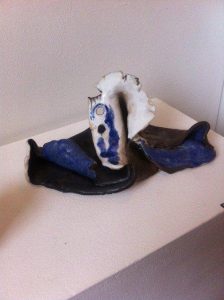 For four of the formative years, she studied the history of art. “To produce even simple work, you must know history of art, ” Marta insists.

Marta Boros is associated with three galleries – BAR Gallery at Willesden Green, Espacio in Bethnal Green Road, and Studio Sienko Gallery at Borough, and she is active in the branch of ceramic sculpture, showing at a recent exhibition at Morley College, London.