When bulk cargoes shift, liquefy, catch fire or explode as a consequence of poor loading procedures, the consequences can be massive. Ships may capsize, lose stability or sustain severe structural damage.

Such happenings enhance the risks -and the occurrence- of death, injury, insurance claims, operational delay and considerable expense.

This has prompted the UK P&I Club, Lloyd’s Register and Intercargo to produce a pocket guide and checklist for ships’ officers and agents who arrange cargoes for loading and present/introduce  same members of the media in London earlier today at the UK P&I Club premises in Fenchurch Street.

Carrying solid bulk cargoes safely: Guidance for crews on the International Maritime Solid Bulk Cargoes Code outlines the precautions to be taken before accepting solid bulk cargoes for shipment; sets out procedures for safe loading and carriage; and details the primary hazards associated with different types of cargoes. A quick reference checklist and flowchart summarise the steps to be followed.

The guide reflects the compliance requirements of the IMSBC Code, which became mandatory on January 1st 2011 under the SOLAS Convention. It addresses the Code’s three key groups: A (which may liquefy), B (chemical hazards) and C (all others). Appendices cover IMO regulations and guidance relating to the transport of solid bulk cargoes and provide an overview of the IMSBC Code.

It comes in a laminated flipover format for on-the-spot use and for enhancing awareness among operators, shippers and charterers.

Sam James, Lloyd’s Register’s Global Head of Fire and Safety, said the guide would be extremely useful to crew members as an aide memoir. “This guide will heighten awareness of seafarers, managers, charterers and shippers to the hazards associated with carrying solid bulk cargoes. Everyone involved has a responsibility to ensure cargo is accurately declared and the hazards mitigated.” 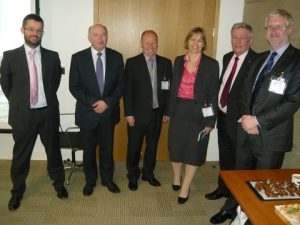 Intercargo Secretary General Rob Lomas said “Intercargo is pleased to have contributed to this useful publication which highlights the key responsibilities of industry stakeholders and the importance of the IMSBC Code. The guide underlines the importance of proper cargo declarations and will be a useful tool for the wider maritime community, including shippers and charterers and those who do not regularly carry dry cargoes in bulk. Getting the checklist on board ships will help expand seafarers’ knowledge, which will be of great value.” 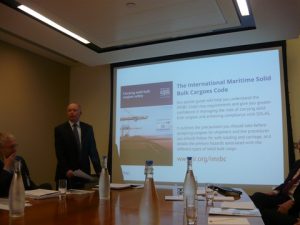 UK Club Loss Prevention Director Karl Lumbers emphasises that the new Code has significantly increased the obligations on both suppliers and recipients of solid cargoes. “The main purpose of the Guide is to provide on the spot references to help in practical situations. It outlines the precautions to be taken before accepting cargoes for shipment and the procedures to be followed for safe loading and carriage, and details the primary hazards associated with different solid bulk cargoes. In giving all parties a better appreciation of the IMSBC Code, the Guide provides greater confidence in managing the risks of carrying solid bulk cargoes and achieving compliance with SOLAS.” 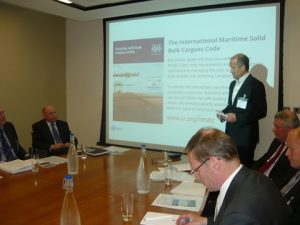 The event was introduced by Nigel Carden from the UK; Nicholas Brown, LR’s Marine Communication Manager emphasized the importance as well as the continued cooperation between the three entities. Joanna Townsend, LR’s Head of Fleet Services spoke too and an interesting Q and A session followed. Charterers, Shippers and Receivers as well as Shipbrokers should join-in to improve overall safety for the benefit of human life and insurance too!

At a lovely buffet lunch which followed many interesting pints where heard and more views exchanged. Understand that over 22, 000 pocket guides are about to be distributed! Excellent; watch this space!

For further information, the Carrying solid bulk cargoes safely guide is available via the following links: 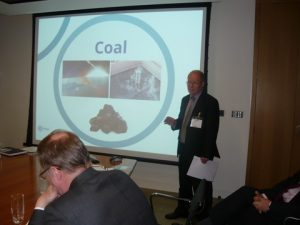 Intercargo represents over 160 bulk carrier owners/operators (vessels engaged in the transport of dry bulk commodities such as coal, grain and iron ore) and associates. With Non-Governmental Organisation status at the International Maritime Organization (IMO), Intercargo’s objective is the creation of a “safe, efficient and environmentally friendly” dry cargo sector. Intercargo, founded in 1980, works within the Round Table of international maritime associations comprising BIMCO, the International Chamber of Shipping, Intercargo and Intertanko.