On top of the world: great art from Down Under is transported to Royal Academy for forthcoming Australia exhibition 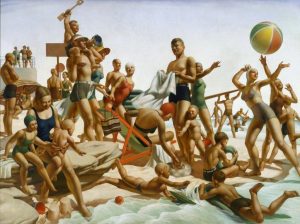 On top of the world: great art from Down Under is transported to Royal Academy for forthcoming Australia exhibition, By James Brewer

Informed and led by landscape – that is the curators’ undertaking for the great exhibition simply titled Australia which will open at the Royal Academy in London on September 21 2013. The first exhibition of its kind in the UK for half a century will run until December 8 and will harbour many masterpieces. Like many of its artists, though, the show will mostly turn its back to the sea.

The 200 works selected are brilliantly immersed in nature – nature very much of the terra firma variety. What of the First Fleet and of Australia’s magnificent coastline, bays and anchorages? It is argued that the exhibition does speak to that, in its celebration of immigrants (even today, a quarter of Australians were born overseas) continuing into modern work, and that the base year chosen of 1800 makes for the principal focus being dry land.

Captain James Cook had ‘discovered’ what was to be named New South Wales in 1770, reconnoitring the entire east coast. It was 1788 when the First Fleet carrying the founders of the new Australia arrived at Botany Bay, and because of supply considerations and its over-exposure to open sea, sailed north to Port Jackson. That was just the start, however. Up to the mid-19th century, England sent at least 800 ships more ships with 160, 000 convicts. They joined and often devastated the 300, 000 indigenous peoples, whose ancestors had inhabited the continent for more than 10, 000 years.Today, most of Australia’s population of 22.5m is concentrated in two coastal regions – the east and southeast, and the south-west. More than 80% of Australians live within 50km of the coastline. Seven state capitals are located on the coast, but it is the bush continues that has had the greatest impact on the Australian psyche.

This infatuation with the interior points to an intriguing commonality with the Aboriginal people, to whom the landscape is sacred and is embodied intheir creative narrative, the Dreaming. The curators were therefore wise to open the Royal Academy to embrace works by Aboriginal artists including Albert Namatjira (1902-59), Rover Thomas (c.1926-98), Emily Kame Kngwarreye (1910-96) and artists from the Papunya Tula group of the Western Desert; in the same way as they choose European-origin artists, from the first settlers to the present day. 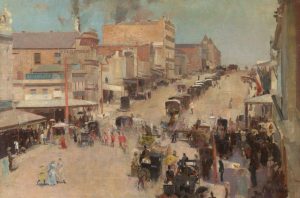 Immigrants such as John Glover took pure pleasure in the ownership of the land, and he was the first artist to capture natural beauty, in the beginning of a move away from European artistic conceptions. This relationship was to be at the core of much subsequent art. Tom Roberts (1856-1931), for instance, expressed the romantic idealism of the bush during the depression of the 1890s. When Arthur Streeton (1867-1943), depicted a critical moment during the construction of a railway line, the human drama of the painting is substantially overshadowed by the landscape. Among other Australian impressionists who were heavily influenced by bush mythology was Frederick McCubbin (1855-1917).

Paintings executed around 1930 by Grace Cossington Smith (1892-1984) of the Sydney Harbour Bridge radiated the optimism and dynamism exemplified by its construction. When Arthur Boyd (1920-99) and others celebrated mining, landscape continued to iadd clarity to their compositions.

Once urbanisation bustled into the picture, leisure time too was examined. The allure of the shore is represented by paintings including Charles Meere’s Australian Beach Pattern from 1940, crammed with healthy and handsome bathers.

Ned Kelly, 1946., By Sidney Nolan, Enamel on composition board, National Gallery of Australia.Gift of Sunday Reed 1977.

In 1948 Sidney Nolan (1917-92) described his unsettling Ned Kelly series as “a story arising out of the bush and ending in the bush.”An understanding of landscape was central to his work.

The curators – Kathleen Soriano of the Royal Academy, and Dr Ron Radford and Dr Anne Gray of the National Gallery of Australia – have adopted a robust scope, in addition to paintings featuring drawings, photography, watercolours and multimedia. This is also a big logistics exercise: Dr Gray said that it would take a month to transport the works from Australian galleries, and another month to return them after their three month loan to London.

The Australian government has contributed A$200, 000 towards the exhibition, and A$50, 000 for a programme of film and other events in London. Much of the support for the exhibition comes from the National Gallery of Australia (an Australian government institution) and its friends. Australia’s deputy high commissioner, Andrew Todd, told journalists: “No group is more persuasive than artists who, in holding up a mirror to Australian life and landscape, express so effectively who we are as a people and a nation.”

Charles Saumarez Smith, chief executive of the Royal Academy of Arts, admitted that most people in the UK have been “historically, shamefully ignorant of Australian art. The exhibition will be, for everyone in this country, a great revelation.” Ms Soriano agreed: “This survey is long, long overdue.”

Christopher Le Brun, President of the Royal Academy, said that patronage for the event from the Prince of Wales “acknowledges the ambitious scale of the project and the close links that the UK and Australia continue to share today.”

The show will highlight the significant contribution that Australia makes to international art, and, it is hoped, will open new ways of looking at Australia and Australian art.