City of London pulls together for big charity row

CITY OF LONDON PULLS TOGETHER FOR BIG CHARITY ROW*

Spitalfields market will be transformed on the evening of 11th September 2013 when 100 teams making up 2, 000 rowers will row 1 million metres in The Big Row (www.TheBigRow.org ). This major City event is raising money for the Chauncy Maples Malawi Trust (www.chauncymaples.org ) a charity created to renovate the ship Chauncy Maples on Lake Malawi and bring vital healthcare to a country that has only 250 doctors for its entire population of 16 million. 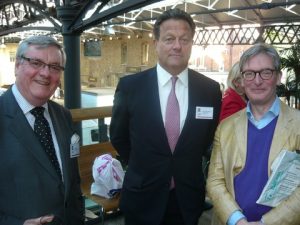 The Chauncy Maples Malawi Trust and main sponsor, Thomas Miller an international provider of insurance, professional and investment services, have invited City firms to enter teams of between 10 and 20 to take part. Commitments for over 30 teams have been received by a wide range of City businesses demonstrating the event is already gaining momentum. Thomas Miller has led the City, including lawyers, engineers, insurers and brokers in raising over £1.5m and the Big Row aims to raise the last £1, 000, 000 to complete the renovation.

Well known sporting stars and other celebrities will attend the event and prizes will be awarded for the fastest crews, best in class (lawyers, accountants), best outfits and lots more. A number of high profile celebrities have already given their support to the launch.

Roger Gifford, Lord Mayor of the City of London, said: “The UK’s maritime sector is the architect of our Nation’s success, and I am delighted that many of the industry’s leading lights are supporting the renovation of Chauncy Maples into a floating health clinic for the villages around Lake Malawi.  This innovative and ingenious project will provide remote communities with essential medical care.  Thomas Miller and all the business-supporters of Chauncy Maples are making an important and extremely effective contribution – an excellent example of Corporate Social Responsibility.  The Big Row will complete the Chauncy Maples fundraising project and I urge every robust rower to participate!”

Sir Matthew Pinsent, CBE, patron of the Big Row said: “We need to raise £1, 000, 000 to complete the renovation. So please dig deep to help the crews hit their target. If we pull together, we can make a big difference.”

Angela Rippon, OBE, patron of the Big Row said: ““Chauncy Maples will provide vital healthcare for 200 hard-to-reach lakeside villagers a day, and  sponsorship of The Big Row will help make that happen.”

Hugo Wynn-Williams, Chairman of Thomas Miller said: “We have already had tremendous support from our City community and are really looking forward to what should prove to be a fantastic event. The Big Row represents a fun way of competing for a great cause in one of the City’s iconic landmarks.”

The event is also supported by the Honourable Jeffrey Evans (Sheriff of the City of London, Admiral Lord West of Spithead, the Right Reverend Donald Arden (nephew of the original engineer who supervised the reassembly ofChauncy Maples in Malawi in 1900), Ben Hunt-Davis, Kit Hesketh-Harvey, and the High Commissioner of Malawi. Those wishing to enter teams should contact TheBigRow@Thomasmiller.com or call 020 7204 2356.

The Big Row is one of the events taking place during London International Shipping Week (http://www.londoninternationalshippingweek.com). 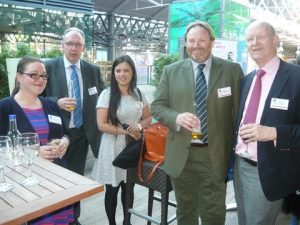 The Chauncy Maples Malawi Trust is a registered English charity, based in Oxford. Its aim is to bring health care to some of the poorest communities in the world around Lake Malawi by renovating Africa’s oldest motor ship, the Chauncy Maples, into a mobile clinic.

Currently Chauncy Maples is being renovated: the super stucture has been removed and the hull plating repaired. The installation of the piping and liquid systems is under way. The renovation is taking place in the shipyard in Monkey Bay at the southern end Lake Malawi. This facility is owned by the Malawi Shipping Company, a subsidiary of Mota Engil, a large Portuguese infrastructure company quoted on Lisbon’s Euronext stock exchange. During the next 10 years its associated charity, Fundação Manuel António da Mota, is a co-sponsor and partner in the project and will provide €2.75m towards the technical running costs of Chauncy Maples. The renovation is expected to be completed by the end of 2014.

Why does Lake Malawi need a clinic?

More than 78% of Malawi’s 16.3 million people live in poverty, with an income of less than US$1.25 per day. The under-five death rate is 178 per 1, 000 live births – 30 times worse than that in Europe or America. There is only one doctor in Malawi for every 52, 000 people. Along parts of Lake Malawi the Villagers have little or no access to medical care. Sick people can’t work; sick children can’t attend school. 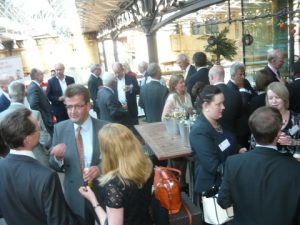 Moored on Lake Malawi is the one-time steamer Chauncy Maples which was built in Glasgow in 1899. Designed as a missionary ship, she has not sailed for two decades. This project is renovating the MV Chauncy Maples as mobile healthcare clinic. The on-board nursing team will provide treatment for diseases such as malaria, tuberculosis, measles and HIV/AIDS. Other vital services will include ante-natal and maternity care, simple procedures, dental care, child immunisation, family-planning and advice on safe sex. The Lake is 580km long (the distance between London and Glasgow) and 75 km wide, with villages along its shore which are difficult to access by road.

The story of the Chauncy Maples (photos in http://smu.gs/17iCOlW)

The Thomas Miller Group is an independent and international provider of insurance, professional and investment services.

Thomas Miller’s origins are in the provision of management services to mutual organizations, particularly in the international transport and professional indemnity sectors; where today they manage a large percentage of the foremost insurance mutuals.

Increasingly it applies its knowledge and expertise to the development of specialist privately owned businesses.

* The pictures above are from last night’s event jointly organised by Thomas Miller and Mota-Engil at Las Iguanas restaurant at Spitalfields. It is worth reminding in this note that The vessel is being rebuilt and equipped to provide healthcare services to people living by Lake Malawi. The Manuel Antonio da Mota Foundation, the charitable arm of the Portuguese international civil engineering company Mota-Engil, has joined the partnership between Malawi’s Ministry of Health, The Chauncy Maples Malawi Trust and Thomas Miller.  This joint venture will renovate and provide technical ship management services for Chauncy Maples. The Mota Foundation will finance €2million of the running costs during the next ten years.