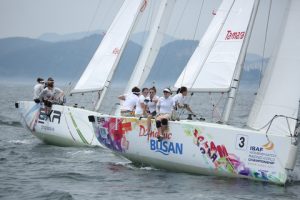 Wednesday 5 June 2013 – After a postponement due to lack of wind, Tamara Echegoyen of Spain swept her opponents away when the ISAF Women’s Match Racing World Championship 2013 finally got under way in Busan, Korea.

With five wins and no losses at all, the gold medallist from the London 2012 Olympics clearly showed that she is still to be reckoned with, “We had a fine day out there today, with my team doing an excellent job. The boats here are different than most other boats we’ve sailed, so we needed to very quickly adjust the timing and the manoeuvres, especially in fixed situations, ” Echegoyen explained.

“There were some pretty tight situations in the pre-starts, and also some very close matches, but we only saw green flags at the umpire’s boat during our matches.

“In the first match against Alexa Bezel we were behind for a while, but managed to catch up on the downwind. We have to continue sailing every race in the mood we had today.”

As the sailors walked to the venue along Haeundae Beach this morning, they could guess that it might be a slow start. The sea beyond the beach was flat calm, and their suspicions proved correct as the Principal Race Officer, American Peter Reggio, postponed the start for an hour waiting for breeze.

The patience paid off as a decent north-easterly breeze filled in along the beach. The racing continued from just before noon until just past six in the evening, when the ninth flight was completed.

Tied on second place after the first day of racing in this World Championship, which is also the second stage of the inaugural Women’s International Match Racing Series, are Ekaterina Skudina of Russia and Danish sailor Camilla Ulrikkeholm. Both have won five matches and lost just one each.

“It’s been a day with very tricky wind conditions and a lot more current than we’re used to at our home waters in Öresund, between Denmark and Sweden. But we managed to keep very good speed throughout the day, ” the Danish skipper analyses.

“We did a good job, only losing the match against Skudina after a bad prestart, when the umpires also penalized us. But we managed to track her, keeping the same distance around the course, so there is nothing wrong with our speed. In the next round-robin we hope to keep the same speed, but get out from the start a little better.”

Local hero of the event is young and ambitious Sung-Eun Choi, who defeated Susannah Pyatt of New Zealand in their match, “We saw some breeze coming on the left side of the course, and were happy when Susannah and her crew split to the right, ” says Choi, who further extended her lead as the race went on.

With just one win and six losses the Korean crew is on ninth place so far.

When products come back to haunt