An artist from Sheffield Hallam University has created a 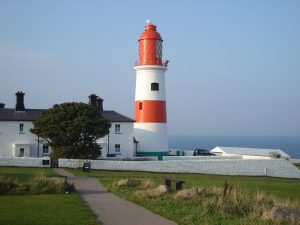 unique musical performance to mark the demise of the iconic nautical siren that has traditionally haunted the UK’s coastline.

The project is an ambitious musical performance, which marks the disappearance of the sound of the foghorn from the UK’s coastal landscape. Foghorn Requiem will be performed by on-shore brass bands, Souter Lighthouse foghorn and an armada of vessels positioned off shore. The event, in South Tyneside, is part of the Festival of the North East.

Lise Autogena said: “Foghorn Requiem will be conducted and controlled from afar, ships at sea will sound their horns to a musical score that will take into account landscape and the physical distance of sound. The composition, performed live to audiences on the coastal cliffs, will be played across a space of several miles around Souter Lighthouse.

“The idea is to create a piece of music that incorporates space and landscape directly into the composition. For Foghorn Requiem we have used acoustic modeling and developed technology that enables us to perform a musical piece, where sounds originating miles away from the audience, will combine with more conventional instrumentation.”

Foghorn Requiem is a celebration of strong maritime based culture in the North East and a requiem for the de-commissioning of foghorns in the UK.

The piece will be performed on Saturday 22 June in the North Sea area of Souter Lighthouse, between South Shields and Sunderland. For more information visit www.foghornrequiem.org

Foghorn Requiem was commissioned by South Tyneside Council, The National Trust and Festival of The North East. The producer of the Project is Grit and Pearl.

Find all our recent releases at http://www.shu.ac.uk/news.

Following the Path of the Transport Revolution