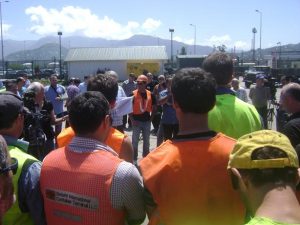 7  June 2013 – Dockers in the Georgian port of Batumi have agreed a number of improved conditions for workers after management came to the table for good faith negotiations following union strike action.

ITF affiliate, the Georgian Seafarers’ Union, has been supporting industrial action by port workers after a series of failed talks over the past two months with port operator, Batumi Industrial Holdings Ltd.

The ITF acting general secretary Stephen Cotton wrote to management calling for them to negotiate with the union representing port workers, with a view to addressing their concerns around precarious work and health and safety, amongst other things.

As a result of these negotiations some of the workers’ demands have been met including a medical insurance package, improved facilities in rest rooms and responsibility being taken by the company for the provision of safety equipment for workers regardless of whether they are employed directly or via a contractor. A salary increase of 2.5 per cent was also secured. The union intends to pursue further negotiations on behalf of Batumi dockers to address issues around overtime payments and wages, and bringing long term temporary staff over to permanent contracts.

ITF dockers’ section secretary Sharon James said: “It didn’t seem that this management had any intention of negotiating in good faith, so this is a real breakthrough. The concerns of the union, real concerns over everyday issues that affect every person working in the port, are being taken seriously. That’s what the union has been striving for so it’s a significant achievement.”