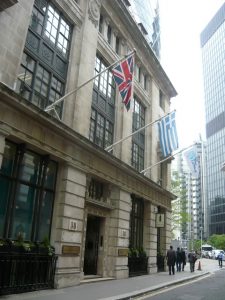 Use of the Baltic Exchange’s freight market information and its disputes resolution services has shown a marked increase over the past 12 months as more companies from outside the UK join the London headquartered shipping exchange.

The Baltic Exchange has today (12 June 2013) released its 2012/13 Report & Accounts which show that membership of the Exchange is up to 602 companies and that revenue derived from its freight market information and membership subscriptions has risen to almost £4m. It also reports that turmoil in the shipping markets has led to an increase in complaints handled by its Membership Committee and the collection of US$1m on behalf of members.

“It’s our independent benchmarks for the bulk shipping industry which are the basis for our continued success. The call on our services by shipbrokers, owners and charterers operating in a very tough market has grown year on year. We’re seeing large volumes of period business being fixed on Baltic benchmarks. However, use of our data in the wider financial markets has slowed, recognising the reduction in bank trading activities and lower, less volatile freight rates.”

The Exchange is currently undertaking an extensive review of its indices, with changes to its capesize and supramax types expected to be implemented at the end of 2013. Changes to its panamax descriptions will follow as soon as practical after. The Exchange is currently resolving whether the balance of routes and specific routes reported should be amended. The results of the review will be announced shortly.

Despite the losses incurred by the Exchange’s freight derivative trading platform Baltex, the Baltic Exchange still made a profit of £47K on its operations and a pre-tax profit of £1.6m. The Baltex trading screen, launched in June 2011, has 34 principal members, but against the backdrop of low overall dry FFA volumes has seen disappointing levels of business.

Writing in the Report & Accounts, Chief Executive Jeremy Penn explains the steps being taken to grow business on Baltex:

“In response to the very low volumes on Baltex since last autumn, we have introduced a number of new functions and initiatives. The most important of these, aimed at brokers, are the Broker Only Order (replicating more accurately current market practice) and an equity warrant earn-in scheme which allows brokers who are active on the system to earn up to 25% of the equity in Baltic Exchange Derivatives Trading Limited.”

A full copy of the 2012/13 Report & Accounts can be downloaded fromwww.balticexchange.com/media/pdf/Report&Accounts2012-13.pdf