Scenarios for the Future of Shipping and Global Marine Trends 2030 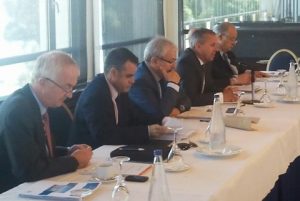 In their opening comments, Richard Sadler, Lloyd’s Register CEO, and Tom Boardley, Lloyd’s Register’s Marine Director – currently Chairman of IACS –, provided an update on recent developments across the Lloyd’s Register Group, the move to the Global Technology Centre in Southampton and the Group’s focus on technology and innovation. Mr Boardley also talked about the ways to best continue to influence the development of effective regulation in shipping. He emphasised the importance of making the most of both class and owners’ expertise, and a discussion followed on the governance of international shipping and on the commercial outlook for Classification.

Tom Boardley together with Apostolos Poulovassilis, Regional Marine Manager for Europe, Middle East & Africa, provided an overview of the recently published report Global Marine Trends 2030, prepared by a team from Lloyd’s Register, Qinetiq and University of Strathclyde. Mr Boardley presented the scenarios assumed and the global drivers within the study – population, economy and natural resources, explaining their impact, the possible future development of trade in the main marine sectors including, for example, the impact that Australian gas production will have on the global energy trades.

Mr Poulovassilis presented the Shipbuilding and Shipowning scenarios for 2030, specifically looking at bulkers, tankers, LNG and containerships. One of the key highlight is that China will have a large market share of both shipbuilding and shipownership in all scenarios. For European owners their share of the world fleet is largest in the Global Commons scenario – in a world where there is far more co-operation, growth is stronger and all benefit. Overall, under these scenarios there is a positive outlook regarding Greek ownership during the next two decades, and the Greek fleet could grow at a rate of around 2.8% annually towards 2030.

Dr Martin Stopford, President, Clarkson Research, gave the Committee his perspective of the scenarios for shipping, examining historical trends, the future outlook, the purpose of scenarios and a few words about basic guidelines for their formulation. Dr Stopford explained briefly that the shipping system, geopolitical changes, current commercial models and transport performance are factors that contribute to deriving to future scenarios.

Mike James, Management Systems Business Director, addressed the Committee on Management Systems Developments in the Marine Industry. He emphasised the contribution and importance of management systems that deal with energy efficiency, effectiveness, resources and mix, and the fast growing demand around them lately in the energy industry. He introduced ISO 50001, the Energy Management Systems certification standard, describing the benefits, including cost reduction, increased energy efficiency and security as well as improved environmental performance. The development of the ISO/PAS 28007 standard which provides guidelines for Private Maritime Security Companies (PMSC) providing privately contracted armed security personnel (PCASP) on board ships was also discussed.

The Committee Chairman Theodore Veniamis, who chaired his second HAC Committee meeting since his election in 2011, summarised the presentations, the various arguments and the discussion, also noting together with Mr Sadler the importance of classification societies working with owners and other stakeholders to achieve the best for the marine Industry. Mr Boardley’s contribution as chairman of IACS towards the latter goal was emphasised and noted with thanks by all.