Demand:
Oil demand growth is driven almost exclusively by the Asia/Pacific region, which is set to consume another 500, 000 barrels a day on top of the 1 million barrels per day increase in 2012. Changing tanker trading patterns are constantly happening due to the above, as well as changes in the US oil market.

In our last report, we noted that the US had become a net exporter of gasoline, causing imports to decline to 0.6 million barrels per day. As a consequence, European refiners have struggled to find new buyers, but a fire at the largest refinery in Argentina has given the refineries a much-needed relief. Over four million barrels of diesel and gasoline have been shipped to Argentina in April from Europe and the US. The European refineries may find further support from its old buddy the United States, as the latest import numbers from EIA indicate that gasoline imports to the US surged just before the start of the driving season. 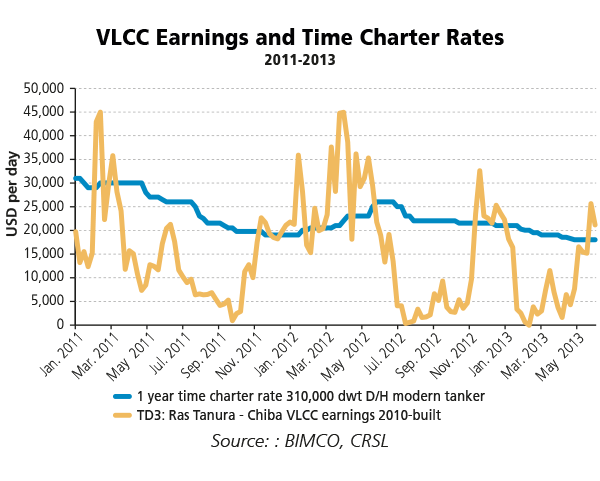 In the VLCC market, earnings on the benchmark route TD3 from Ras Tanura in Saudi Arabia to Chiba, Japan have just entered positive territory again, following almost four months of sub-USD 20, 000-25, 000 per day break-even levels for most modern VLCCs. Meanwhile, the Suezmax market has fared better in the first 4 months but lost some steam as May went by. Time charter activity remains scarcely seen, with some brokers quoting the VLCC 1 year time charter market as low as at USD 16, 000 per day (3 year T/C rate at USD 20, 500 per day), the appetite is non-existent. Only a few VLCC TC reports in past two months at very short periods, 1-2 months at USD 25, 000 per day and 6 months to USD 17, 000 per day. Regardless of how scary this may sound, it appears as if a new floor has perhaps not been reached yet for the crude oil time charter market, as rates have been trending down since last Summer.

Freight rates on benchmark routes for the LR1 and LR2 product tankers have disappointed in recent months by dropping from a strong USD 15, 000 per day to a very sluggish USD 5, 000 per day. It has been the lack of requirements for longer hauls and a rather weak Atlantic market that has oversupplied the Eastern market, with falling freight rates as the consequence. As highlighted by the IEA recently, European oil demand is set for another drop of almost the same size as last year, when demand fell by 500, 000 barrels per day.

Supply:
A lot of action has taken place in the product tanker segment since our last report was finalised end-March. “All of a sudden” 2013 now represents a turning point in newbuilding deliveries, as postponement of 2013-bound tonnage is now pushed into 2014 when several newly placed orders are also scheduled for delivery.

In terms of newbuildings, deliveries have come almost to a standstill, with just 5 vessels coming on stream in the last 10 weeks. Furthermore, the recent improved freight markets have made demolitions come to a virtual stop, with just two product tankers demolished in February as well as in April and just one in May.

As regards new orders, some owners seem to have taken advantage of what may seem to be prices at the bottom. Year-to-date ordered tonnage has already surpassed the total amount of new orders signed during 2012 by 22%. Is now seems to be LR2 and MR tonnage that owners want.

For the full year of 2013, BIMCO now expects the product tanker fleet to grow by 2%, positively impacted by a resumed but steady demolition action and slow inflow of new tonnage as such.

Looking into the crude oil tanker segment, we see the delivery pace that we expected. Out of the 10 million DWT that has hit the market in 2013, 17 has been VLCC’s, 20 Suezmax and just five Aframaxes. The VLCC fleet now consists of 616 tankers – up by 13 units net since the start of the year – illustrating the lack of much-needed demolition.

Fortunately, we have now seen the first outright demolitions of VLCC tonnage this year taking place in the past two months. Four units built in 1991, 1993, 1995 and 1999 respectively have left the fleet. BIMCO still sees close to 50 VLCC’s being exposed to demolition due to poor energy efficiency, old age, obsolete design and limited trading opportunities.

The Suezmax segment is up by 20 units net to reach 488 – which is highlighting the fact that this vessels size is set to outnumber the others in 2013. Aframax is up by only four units, to 898 units over the duration of the past year, bringing some optimism for owners in the Aframax market.

BIMCO estimates that crude tanker supply growth in 2013 will come in at 3.4%. In respect to demolition activity across the board of crude oil tankers, much more would be welcomed, but only limited action is seen to help curb fleet growth. Accordingly, BIMCO has lowered the forecast demolition of crude oil tanker tonnage by 2 million DWT to 10 million DWT. Year-to-date demolitions of just 2 million DWT of crude oil tonnage shows that we expect the poor earnings to stimulate more breaking of commercially overmatched tonnage as the year progresses. 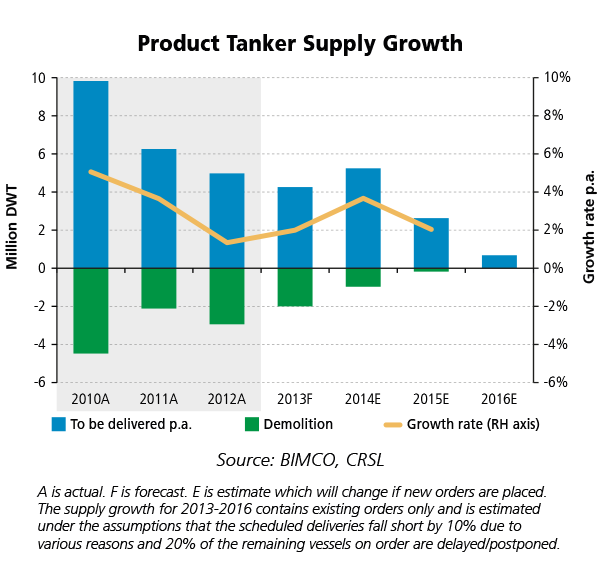 Outlook:
The world is surely going to see some new trading lanes emerge in both product tanker and crude oil segments. The shift in demand as well as where refinery capacity is being built may mean the end of some household names in trading lanes. For product tankers, the gasoline-arbitrage motorway TC2 (Rotterdam-New York), is one which may see less limelight in future, whereas distillate trades from US Gulf to Latin and South America may attract even more attention than they already do today.

The development in the US energy market does not only impact the US economy but also other energy markets. In crude oil tanker markets, the similarity in crude oil quality (sweet light) for West African oil and domestically produced US oil is felt in the VLCC/Suezmax market. The US also used to be the main export market for Venezuelan fuel and crude oil, but China is looking to take that position, which has been cemented by the oil-for-loan agreements between Venezuela and China. Venezuelan oil minister Rafael Ramirez said that Venezuela exported 0.6 million barrels per day to China during the first four months of 2013. That is not to say that the US is looking to become completely independent of Venezuela and other countries; Saudi Arabian oil minister Ali Al-Naimi said: “Talk of energy independence [in the US] fails to recognize the inter-connected nature of international energy markets. I believe this talk of ending reliance is a naive and rather simplistic view”. Only time will tell if the changes happening in the US oil market will affect also Saudi Arabia and the international energy markets permanently. 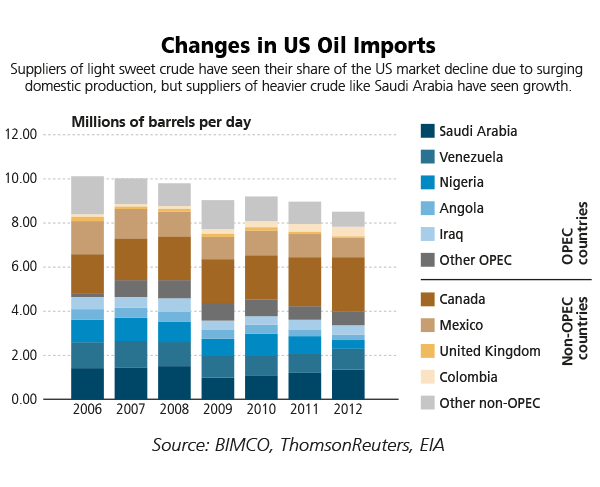 In the product segment, BIMCO expects earnings on benchmark routes for LR1 and LR2 from AG to Japan will continue recent volatility within the interval of USD 10, 000-20, 000 per day.

Handysize and MR clean rates have lost some of the steam from Q1 during the most recent month. For the coming two months BIMCO expects freight rates around USD 8, 000-13, 000 per day.