We say in Russia that talking about ballet is like dancing architecture, states Natalia Vodianova, supermodel, actress, philanthropist – and enthusiast for this enduringly expressive and graceful discipline. From now on, that ‘architecture’ has a new dimension, leaping into 3D as part of the launch of simultaneous broadcasts of stage works in cinemas around the world.

When the Mariinsky Theatre in St Petersburg on June 6 2013 projected its performance of Tchaikovsky’s Swan Lake live to 3D to hundreds of film theatres in 60 countries, classical ballet entered the techno-era.

In the transmission, Natalia was the ‘storyteller’ introducing each of the three acts; and in between she was a confident anchorwoman interviewing the celebrities of the evening. Her own life story is a Cinderella-like tale (and who knows might one day be set to ballet) and we shall return to that later in this article. 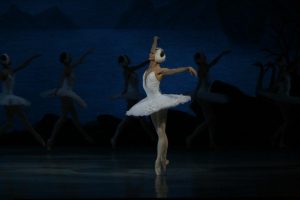 Filmed in Cameron Pace 3D – the technology used by James Cameron and Vince Pace to reap big box office takings for productions of Titanic,  Avatar and Life of Pi – the Mariinsky production was beamed far and wide, variously in 2D and 3D, in the first of a planned series of such cinematographic coups.

Supplementing the standard ballet experience, the production began with a brief televised tour of the majestic buildings and waterways of the Baltic city. Conductor and Mariinsky Theatre director Valery Gergiev says on camera: “Welcome to St Petersburg, one of the most beautiful cities in the world. Peter the Great and Catherine the Great made it into one of the most respected cultural capitals.”

In contrast, mundane notes are struck pre-curtain as members of the Mariinsky audience chatter, refresh their lipstick and fiddle with their mobile phones.  What lingers most in the mind is the pomp and poetry of perhaps the best-loved ballet in the world, and Gergiev claims that its interpretation in 3D makes it more spectacular than ever. This is as it should be, for this performance was part of the celebration of 275 years of Russian ballet. The first night of Swan Lake was in St Petersburg in 1895. The Mariinsky is “only one month old” in terms of its thorough, $700m renovation to play up its historic 1860 glory.

Before long, the baton-less hands of Gergiev are aflutter, and more importantly for the viewer, so are the limbs of principal ballerina Ekaterina Kondourova, from scene two onwards Kondourova’s long, long arms oscillate as though she were a feather in the wind. Taking the role of the white swan Odette and black swan Odile, Kondaurova delivers a magnetic display, intently responding to the ministrations of Prince Siegfried (Timur Askerov) who with much of the cast has in his castle just merrily celebrated his coming of age. 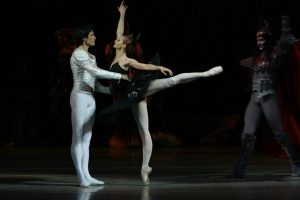 Ekaterina had admitted earlier to some anxiety: “I am a bit nervous. It is not every day that you get the chance to perform before such a big auditorium [as in the international screenings].” There was no doubt, though, that “it is a great day for all of us.”

Playing innocent and vulnerable, Kondourova makes for a highly sympathetic swan-princess, complaisant in the big lifts yet effortlessly in control on terra firma. There was huge applause for her, her leading man, for Andrei Yernakov as the evil Count Rothbart, Vasily Tkachenko’s bounding and athletic jester, for the swan chorus and for the others.

As to Natalia Vodianova, ballet has always been symbolic to her of a better life for humankind. “For me as a little girl growing up in a difficult family situation and at a very difficult time in Russia, my grandmother taking me to a ballet provided a very important emotional escape, ” she has said. At the age of 11, she had to help her mother scrape a living by selling fruit in her native Gorky, a city later renamed Nizhny Novgorod, and at only 15 years old she began to share an apartment with a friend. A few years later she was modelling for Louis Vuitton, Marc Jacobs, and Calvin Klein. After the 2004 Beslan school siege, she set up a charity for disadvantaged children; and she is an ambassador for the 2014 Sochi Winter Olympics and Paralympics.
Ross MacGibbon, a former Royal Ballet dancer who has performed with Nureyev, was film stage director for the special performance. Producer Ann McGuire of Glass Slipper Live Events, which plans to work with the Mariinsky on further productions, enthused: “3D really captures movement in space. In a pirouette, when a dancer extends a leg, it flies straight at the viewer. It is just stunning.”

Glass Slipper worked with Omniverse Vision, which produces and distributes media content, including for live event cinema, and has a partner network with access to 4, 000 cinema sites.

One of the 130 UK cinemas feeding from the live-cast was Vue in Leicester Square, where a BYOC-branded cocktail bar served guests such mixes as Odette (vodka, lychee, rose syrup and lemon) and Black Swan (black vodka, blue Curacao, blackberry juice and lychee juice).

The success of this Swan Lake satellite broadcast is an encouraging indication that ballet can go toe-to-toe with some of the biggest entertainment attractions of 2013 – selling as many tickets potentially as Glastonbury, and for shows starring singers such as Beyoncé.

Silhouettes at the Muse gallery