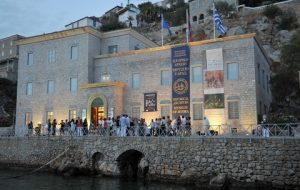 Further to our last on the 10th of May (see at the end the respective link*), the island of Hydra was the place to be from the 7th to 9th of June 2013, where over 80 representatives from all sectors of the shipping industry gathered from all over the world for the 5th WISTA Med conference hosted by WISTA Hellas, to tackle the ever so timely subject on most everyone’s minds these days, “Today’s Crew Challenges” and to celebrate the 20 year anniversary of WISTA Hellas. The Conference was held at the Historical Archives Museum of Hydra, the perfect setting for this maritime forum. 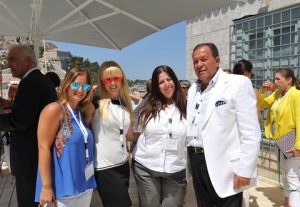 President of WISTA Hellas, Rea Metropoulou set the stage with her opening note on the significance of the “human element”. The Mayor of Hydra himself, Mr. Angelos Kotronis, made a special appearance to address the delegates as did Ms. Konstantina Adamopoulou, Director of the Museum which served to unite the venue with the forum. A special address was presented by Ms. Katerina Stathopoulou of Investments & Finance Ltd. on behalf of the Executive Committee of WISTA International who announced the recent election of WISTA International’s President Karin Orsel of Management Facilities Group to the Vice Presidency of the International Chamber of Shipping as well as the recent election of WISTA Cyprus’s President Despina Panayiotou Theodosiou of Satlink Satellite Communications Ltd to the Board of the Cyprus Chamber of Shipping.

The wide range of sectors brought together by WISTA Hellas under the umbrella of this forum brought to light and engaged the delegates into a lively discussion not only on the general and obvious challenges of recruitment but delved much deeper into the crucial issues and challenges facing all facets of shipping with respect to regulation, insurance, casualty management, and practical implementation not only of training but of the impending Maritime Labor Convention 2006.

View from the audience

The forum provided a rare and unique opportunity for all sides of the maritime industry to hear and comment on the obstacles related to all aspects of seafaring operations as seen by their counterparts. An indication of the level of interest the forum attracted was that as time ran on, none of the delegates seemed to mind at all, even the running over of time into the lunch!

While the forum’s topic, wisely chosen by Angie Hartmann, Board Member and Eleftheria Magiafi, Secretary General of WISTA Hellas Board, given their professional experience as Crew Manager and DMR/DPA respectively in the industry, was aimed at engaging discussion on challenges relating to crew in general, given the nature of the conference, it could not be complete without provoking comment on the particular challenges relating to women and seafaring.

An interesting statistic and thought provoking fact disclosed by Ms. Bridget Hogan of the Nautical Institute highlighted that obstacles to recruitment related to fears of women seafarers leaving seagoing positions as they become wives and mothers has no base, with the percentage of men seafarers leaving the same positions matching that of women in any event.

Greece’s shipping legend Capt. Panagiotis Tsakos, emphasized that the contributions of women to shipping and to seafaring have been significant not only as active participants but made a most important impact in the historical significance of shipping in Greece through their steadfast roles as mothers, wives, sisters and daughters, enabling Greek families as a whole to become pioneers and leaders in the shipping sector. Vice President of WISTA Hellas Dorothea Ioannou added that “when a woman in shipping whether ashore or at sea, is no longer news in and of itself; perhaps that will mean we have finally accomplished something.”

As reported at last year’s WISTA MED Conference in Cyprus, this year’s WISTA MED was also set as the venue for the first WISTA Cyprus/Turkey round table discussion hosted by WISTA Hellas. Representatives of both parties went away from the meeting promising to investigate and report on the present obstacles to future commercial cooperation.

The Conference included a welcome cocktail in front of the Museum on Friday evening, a networking lunch on Saturday at the popular Douskos restaurant under its famous olive tree and culminated in a gala dinner at the well-known picturesque Castello Beach Bar Restaurant on Saturday night.

There  a celebratory cake was served and sparklers were lit by all guests under a most beautiful Greek “starry night” to honor, as the President Rea Metropoulou opined to the guests, not only the 20 years of WISTA Hellas, “but all of the people both from the past and present, both in leadership roles through the Board as well as the membership at large, who made WISTA Hellas such a successful and respected organization both domestically and internationally.”

It’s awesome to pay a quick visit this web page and reading the views of all mates regarding this piece of writing, while I am
also keen of getting familiarity.