Top Posts
Don’t take chances where your health is concerned…
Russian Cargo Theft Trends 2020
IMO Council set to expand under approved amendments
GIWA: And the Winner is…
Hyundai Motor partners with Healthy Seas to foster...
GEODIS invests in new multi-user facility in Icheon,...
Germany’s Greens to benefit from CDU/CSU woes, How...
Weekly Brief: The Superpower of Humans Plus AI
Telenor Satellite announces revolutionary on-orbit life-extension service of...
Delivering Excellence in the Offshore Sector
A Quick News Break with the BDA
Home Markets Where are we in the Shipping Cycle?
MarketsNews 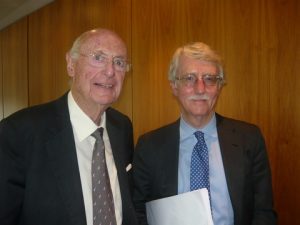 Where are we in the Shipping Cycle? Peter Stokes of Lazard speaks at IMIF meeting of a precarious scenario facing shipowners and banks

A huge shake-up is in store for the shipping industry, as efforts by the banks to keep indebted businesses afloat teeter towards failure.

One of the industry’s top analysts, Peter Stokes, warned of a bizarre and disturbing environment resulting from a struggling freight market and desperation in the finance sector. Mr Stokes, senior adviser and head of shipping at the advisory investment bank Lazard, was speaking at a meeting on June 17 2013 of the International Maritime Industries Forum, on the theme: Where are we in the Shipping Cycle? 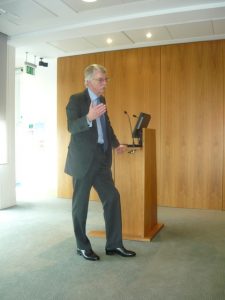 Peter Stokes delivers his speech in front of PowerPoint screen

Only a few days earlier, the global industry had been jarred by one of the leading dry bulk companies, STX Pan Ocean, filing for receivership. The South Korean-based group oversees a 23m dwt operation involving the ownership of 97 vessels and 249 on charter from leading owners elsewhere – and 31 outstanding shipbuilding contracts.  Mr Stokes did not refer in his presentation to the STX Pan Ocean meltdown, but as one of the most serious bankruptcy threats of recent years, it was clearly on the minds of all present at the IMIF meeting, which took place at Lazard’s West End headquarters.

Mr Stokes said that the concentration of outstanding shipping loans in a relatively small number of under-capitalised banks, many of them in the Euro zone, had led to extraordinary book-keeping contortions in an effort to avoid recognising losses which in some cases would threaten the solvency of the institutions.

“The ramifications of this situation are increasingly bizarre, ” he said. “Shipping companies which are clearly bankrupt according to any common sense definition of the term continue to operate with stratospheric net leverage multiples, and, if publicly listed, with a share price which indicates a positive rather than a substantially negative equity value.

“Hedge funds desperate to put money to work in the sector make significant investments in the traded debt of such companies at steep premia to the intrinsic value of that debt in the hope of finding an advantageous way into the restructured equity.” 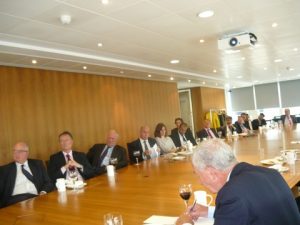 The left wing of the attendees…

The implications of all this for the shipping cycle were “more than a little disturbing. Shipping companies which are allowed by their banks to continue operating, even though they cannot service their debt, are effectively in run-off mode. They cannot grow or renew their assets, and every cent of their cash flow is dedicated to their interest and amortisation waterfall in the hope that a rising market will eventually enable the lender to make a full recovery of arrears.

“In the mean time, they are of necessity takers of whatever freight rate is offered to them in order to generate continuous cash flow and avoid idle time. As the number of these companies increases, their debilitating effect on the freight market is accentuated.”

Mr Stokes recalled that he had cautioned against premature optimism in the dry bulk and container sectors when he last addressed IMIF, in spring 2011, when he said that “shipping companies would do well to shore up their balance sheets in anticipation of continued heavy weather.” 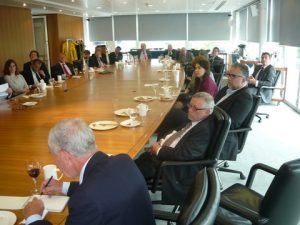 …and the right wing

He said he had spent most of the last two years at Lazard advising lenders on restructuring billions of dollars of distressed corporate shipping debt.

“We are now seeing the acute liquidity problems [that hit] major tanker companies increasingly being experienced in the dry bulk and container shipping sectors. In all three of the major shipping sectors, 2013 has seen severe renewed weakness in the freight market, imposing liquidity pressures on all but the most conservatively financed of companies.”

Yet the view that recovery was just around the corner remained remarkably persistent, reflected most obviously in the newbuilding market. By the end of April this year, for example, there had been more ordering of 8, 000teu+ container ships than in all of 2012, although it was highly unlikely that there would be any repetition of the exuberance of 2011.

We had also seen reported ordering of 5.3m dwt of capesize bulk carriers, despite the fact that average spot rates so far this year had not covered operating costs.

The widespread publicity given to the fuel-efficiency advantages of the current generation of newbuildings had undoubtedly stimulated ordering. “Without claiming any expert knowledge on this topic, I am pretty convinced that the advantages of so-called eco-newbuildings have been and are being over-played, with negative implications for the persistence of surplus capacity.”

The best defences available against large-scale over-ordering would appear to be scarcity of capital and the increasing difficulty of obtaining satisfactory refund guarantees. Another disincentive to over-ordering would be a collapse in secondhand ship prices. It could not be denied that we are in a severe and protracted freight market slump, and yet prices of five-year-old panamax and supramax bulk carriers were more than 80% of newbuilding prices, with Capesizes and Suezmax tankers at more than 70%. The main reasons for this anomaly lay in the artificially low cost of money and the extreme reluctance of banks holding billions of dollars of shipping loans to enforce security and trigger write-downs. 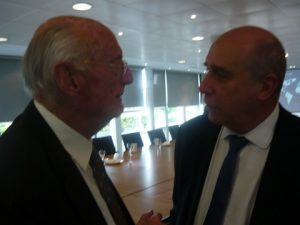 Mr Stokes referred to recent expansionary moves by some operators. “It was evident at the beginning of this year that numerous Greek shipowners who had managed to conserve liquidity from the boom years, or who had stayed on the sidelines during the boom, were taking the view that the market was now close enough to the bottom to justify putting money to work in the purchase of secondhand vessels or the ordering of newbuildings. Pure financial investors should logically take a more rigorous view.”

Under certain conditions, “I would say that firmness could begin to appear as a sustainable trend in the products tanker market in 2014, in the crude tanker and container shipping markets in 2015 and in the dry bulk market in 2016. The alternative scenario, which I am now beginning to view as more plausible, would involve a bungled unwinding of quantitative easing in the United States, leading to turmoil and heavy capital losses in global stock and bond markets. Banks would no longer be able to disguise the true value of their assets, and governments would be forced into a thorough-going clean-up and restructuring of their balance sheets, together with the recapitalisation of surviving institutions and the closure of defunct ones. In such a scenario, prices of secondhand ships would collapse to genuine market-clearing levels. The psychological impact of such a market burn-out would, however, be salutary, since participants would regain confidence in the reliability of asset values and recapitalised and restructured banks would be able to contribute to economic growth.

“A year or two after such a crash, it would be possible to envisage a more vigorous economic upturn, of which shipping would be a beneficiary.”

He concluded with a personal view that shipping will offer attractive opportunities for financial investors over the next five years, “but I am not yet convinced that they have manifested themselves in the three major sectors.” 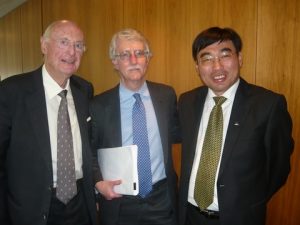 IMIF chairman Jim Davis said of the analysis from Mr Stokes: “Sadly, I do not disagree with a lot of it.”

A member of the audience agreed with Mr Stokes, saying “it is wrong for banks to keep kicking the can a long way down the road. In Germany, it is a big can, and it is a very long road. Banks are not only dealing with the shipping crisis, but with a changing regulatory market. I am wondering, will the banks change from a head-in-the-sand attitude to taking a realistic approach?”

Mr Stokes said that there had been efforts to ease lending emergencies through “temporary stabilisation, the art of the possible, but I think the key banks realise that only gets you so far. Only in the past two to three weeks I have heard banks talking about debt to equity conversions. Zombies turned into companies with an economic future: I think we are moving closer to that. Reality is forcing its way in. We cannot continue to support these situations without significant write-offs. The forces of inertia are tremendous. There are a number of banks which fundamentally depend for their immediate survival on where their shipping books are, and I think we are getting close to a point where the debts have to be cleared, and that is partly political.  It is not just banks, it is governments [that are involved].”

A further question raised was, where has the money been coming from to finance the newbuilding book? The speaker replied: “Some has come from shipowners that have some money and banking support, and they said that the freight market is at its bottom. Some money came from Greece, some from Norway. A lot of what is reported in terms of newbuilding activity is not necessarily firm orders – for instance John Fredriksen has pulled back from his original announcement [regarding capesize bulkers from China].”

Mr Davis thanked Mr Stokes for his “predictably excellent presentation” that had led to a very high level and relevant discussion.  The chairman summed up the quandary for many in the room: “Where the hell are we going?”

Cartographic craftsmanship from the Age of Discovery