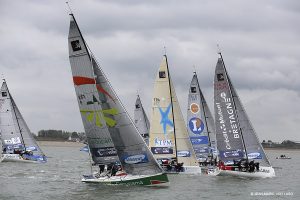 – Groupama 34 win the first offshore leg between Dunkirk and Breskens
– Team OmanSail cross the finish only 54 seconds ahead of Groupama
– Bretagne Crédit Mutuel Elite finish in third place, ranked with coefficient 3
– Sodebo finish 10th due to a broken bowsprit in the early hours of the race
– In-Port racing tomorrow (boats leave the dock at 9am)

The first offshore leg of the Tour de France a la Voile was a wet, intense and happy sprint from Dunkirk, France to Breskens, Holland.

The fleet started at 9pm in calm conditions: sailing downwind in 12 knots from the west on flat seas.

After dusk the wind reached 20 knots, peaking to 25 knots during the night. In the dark of night, surfing down the face of waves at speeds approaching 20 knots, the sailors had to navigate numerous perils: cargo ships, fishing buoys and geographical hazards.

The sailors completed the leg in 12 hours, surfing downwind under spinnakers from 9pm – 2am. They rounded a mark just of Rotterdam and then sailed upwind to Breskens until 7am. The fleet was rewarded with a final hour under spinnaker before crossing the finish in Breskens.

The 96 sailors are now going to get dry, get some rest and some food. In-port racing resumes tomorrow with three races weather permitting (coefficient 1 per race). Departure time from the dock at 9am.

The first part of the race downwind:
“It didn’t come down to much. The race was difficult. We would not have been very happy to lose the top spot having just arrived. It was a very, very good fight with weather that was not easy in the very dark night. At night it was very windy, we were rarely calm gybing the boat in 20-25 knots.”

Dueling with Team Omansail:
“We enjoyed a good fight with Oman from beginning to end. They led for most of the race and at one point we were within a few lengths of each other. The race could have gone either way, but fortunately for us, it ended like this.”

The pace of the Tour de France Sailing and Team OmanSail:
“It wasn’t easy to leave at 21h and sail into such a rough night. We had to refocus heading into the technical beat early this morning, and the crew stayed awake all night. We all need a little rest now!”

Cédric Pouligny, Team OmanSail skipper, leg runner-up:
“We were very fast and strong downwind. We’ve done some nice gybes in strong winds. But we went a bit too far and we got very tired. I’ve been steering most of the time and I’m a bit burnt. We took some risks to be fast. The start was key and we’ve been rather fast downwind, we did well against Groupama. They overtook us upwind. We took some time recovering from it but we did come back on them.”

Christopher Pratt, Bretagne Crédit Mutuel Elite navigator, third of the leg:
“It was a great leg! It started badly because there was a small accident with Sodebo. We are very sorry that they were not able to sail the leg under normal conditions. The Omanis took the lead and we never managed to catch them.

“The leg was truly magical. We had an amazing downwind ride. It was a very dark night and the waves were incredible. We are quite happy with the result even though we wanted to do better. Groupama has set the bar very high and Team Omansail sailed very well. They almost deserved to win. We had an amazing encounter with a cargo ship and Courrier Dunkerque. Daniel Souben went behind the ship and we just ahead. When you’re sailing in 15-16 knots under spinnaker it is not very easy to manoeuvre. Courrier Dunkerque had to gybe to pass behind.”