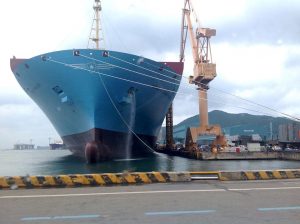 The 18, 270 TEU giant, Maersk McKinney-Moller will make its maiden call at the Pusan Newport Company terminal at Busan Port at 1pm, 15th July, 2013 and it will handle more than 10, 000 TEU of containers here.

The Busan Port Authority said that PNC was awarded Best Productivity for 2012 in Busan, so they are confident that this cargo will be handled as efficiently as possible to provide the best services for the first vessel of Maersk’s Triple-E class.

To celebrate this historic occasion of the world’s largest ship’s making its maiden call at Busan Port, the Busan Port Authority will hold a ceremony, inviting dignitaries and VIPs from the government, civic groups, media and academic sectors as well as key players in the shipping industry.

The Busan Port Authority noted that considering the recent announcement of the P3 network, the world’s largest ship calling at Busan Port is proof that Busan Port is capable of accommodating the biggest container vessels with its deep water access, industry-leading productivity and state-of-the art port facilities.

Mr. LIM Ki-tack, the president of BPA said “This prestigious event is expected to raise the brand awareness of Busan port and strengthen the market position of Busan port as the main transshipment hub for Northeast Asia.”

I wish good luck for you

I wish i could be there, in which canal she cannot pass?

She was NOT “the world’s largest ship afloat” although she was the largest container carrier afloat until her sisterships were delivered….