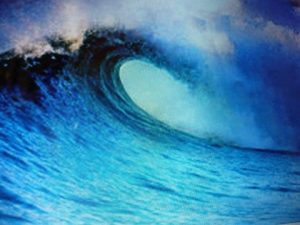 The uppermost reaches of the ocean could be rapidly scanned in groundbreaking high detail using acoustic techniques, researchers say. The method resembles that employed to probe the deep Earth.
For more than a century, geologists have used sound waves to investigate Earth’s interior, analyzing how these waves reflect off different layers of rock. Recently, such seismic imaging has become commonly used by oceanographers. They employ the technique to analyze fine-scale ocean structures — thin layers of water only 3 feet (1 meter) or so thick that vary in temperature and salinity (salt content). These layers can pop up in currents, swirls and the boundaries separating currents or masses of water.

Until now, most seismic imaging of the ocean focused on depths below 500 feet (150 m). This is because structures further up in the water reflect sound only weakly, and there are many sources of noise in shallow depths that can muddle analyses, such as shipping vessels or the breaking of waves. Still, many valuable insights about the ocean waters closest to most human activity potentially awaited scientists who could seismically image shallow waters.

Now marine geophysicist Helen Piété at the University of Brest in France and her colleagues have devised a way to scan the upper ocean at depths of 30 to 500 feet (10 to 150 m). [Infographic: Tallest Mountain to Deepest Ocean Trench]

“These results are very exciting, not only because they provide the first actual imaging of shallow oceanographic structures, but also because they [are the] result of many unsuccessful attempts, ” Piété told LiveScience.
Beating the odds.

One key factor in the research team’s strategy to image the upper ocean is a powerful transmitter of acoustic energy. Another is a receiver that can pick up multiple channels of sound, to help overcome interference from ambient noise. The scientists also made sure the acoustic wavelengths they used matched the thickness of the ocean features they investigated.
A major challenge the researchers faced was that many of the technical aspects of the device’s design had contradictory requirements, calling for a series of compromises to make things work.

“When we started working on this project, many people were very skeptical about our chances, ” Piété said.
The scientists tested their system on the continental shelf off western Brittany in France. From April to October, the warmer upper waters and the colder lower depths at this location become separated by a layer of water known as a thermocline.
“It took us almost four years and four scientific cruises to set up and test the device that we used for this study, ” Piété said.
‘Snapshot of the sea’
The researchers successfully mapped the 30-foot-thick (10 m) thermocline that formed 100 feet (30 m) deep in those waters in great detail over three days last June. They achieved resolutions about 100 times finer than those possible using current state-of-the-art techniques.

“We could observe the thermocline with so much detail that we could even distinguish very small disturbances produced by internal waves induced by winds and tides that nobody has ever seen before us, ” Piété said. “These waves are of particular strategic interest, since they control the distribution of nutrients in the oceans and therefore directly impact the biosphere.”
Normally, to analyze shallow, fine-scale ocean structures, researchers deploy sensors that go up and down in the water. Such measurements are expensive and take hours, meaning they cannot register relatively brief fluctuations. This typically limits their use to patches of water less than 3, 300 feet (1 km) wide, Piété said. In contrast, the new technique allows researchers to scan across miles of water within a single hour.

“So not only are our images more detailed, they also represent an almost instantaneous snapshot of the sea, ” Piété explained. 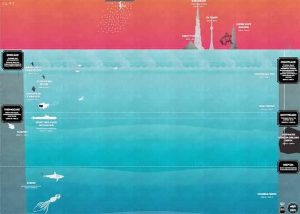 In the future, Piété said she and her team hope to improve their technique enough to detect the salinity and temperature of the ocean. They also hope to further test how robust their system is.
“Until now, we had only one single chance to test successfully our device. Expensive scientific cruises are extremely difficult to get funded nowadays, ” Piété said. “One could probably say that we got lucky on this try, and it is highly possible that good conditions at sea may play a key role in the feasibility of these measurements.”
Piété and her colleagues detailed their findings online May 8 in the Journal of Geophysical Research: Oceans.
Follow us @livescience, Facebook & Google+. Original article on LiveScience.com.
The World’s Biggest Oceans and Seas
Earth Quiz: Do You Really Know Your Planet?
50 Interesting Facts About The Earth
Copyright 2013 LiveScience, a TechMediaNetwork company. All rights reserved. This material may not be published, broadcast, rewritten or redistributed.