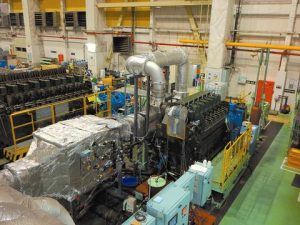 SCR catalytic reactor onboard the vessel

The SCR system received a statement of fact from ship classification society Nippon Kaiji Kyokai (ClassNK) on July 1, verifying that it meets the NOx Tier III emission limit, and its superior denitration performance was confirmed. The system was developed with support from ClassNK’s “Joint R&D with Industries and Academic Partners” program.

The International Convention for the Prevention of Pollution from ships, MARPOL Annex VI regulates NOx emissions from vessels. If all goes smoothly, the diesel engines used on vessels built after 2016 will be required to reduce NOx emissions by more than 80% from the Tier I NOx emission standards in the Emission Control Areas, including North America.

The SCR system will give MOL a head start in responding to this critical environmental issue. This initiative reflects MOL’s effort to prevent air pollution as one of the environmental strategies in its single-year management plan RISE 2013. The company takes a proactive stance in introducing various technologies that will reduce the environmental burden of its business activities

<Outline of SCR system onboard an actual vessel, and details of test operation>

The test operation on an actual vessel is scheduled to last about two years, to observe operability and refilling of aqueous urea, and ensure that: