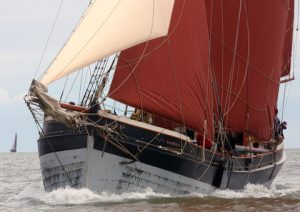 The “Cambria” Credits to The Thames Match Arhieves

The Shipowners’ P&I Club is sponsoring the Mark Boyle Memorial Thames Sailing Barge Match which takes place on 13th July 2013 in this its 150th anniversary year.

The event is held this year in memory of Captain Mark Boyle, who revived the event in 1995 and organised it each year until his untimely death last year aged 55

London, 8th July, 2013 – The Match was the brainchild of Henry Dodd a wealthy London businessman from humble origins who built his business on waste transportation by sailing-barge from London to refuse works along the river supplying ash for the brick-making industry. He was a good friend of Charles Dickens, who used him as the model for Mr Boffin, the refuse magnate of the novel, Our Mutual Friend.

Dodd noticed the intense rivalry between his sailing-barge skippers and decided to harness this competitiveness to make his business more efficient by organising annual races. The first Match in 1863 ran from Erith to Canvey Island and back with a cash prize to the winner, under the flag of the Prince of Wales Yacht Club. The title, it should be noted, derived not from any early royal patronage but from the Prince of Wales pub in Erith.

In 1864 Dodd opened the race up to all-comers and after several years he passed the Thames Sailing Barge Match organisation to a committee of barge owners. Over time, the contestants started to build Spritsail sailing barges specifically designed for speed to win the race. This attracted massive interest and spectator numbers grew to tens of thousands.

At his death in 1881, Dodd bequeathed part of his considerable legacy to the race and this maintained it for the next 100 years. The race continued with some breaks into the 20th century and maintained its highly competitive edge.  In the 1963 Centenary race, for example, the two main rivals (F T Everard and Sons Ltd and the London & the Rochester Trading Co) invested heavily in their fastest barges to ensure victory for vessels that had long since become museum pieces. The winning speed of F T Everard’s Veronica was faster than that of all but six previous America’s Cups. No mean feat.

The Match lapsed for 32 years but since the 1995 revival by Capt Mark Boyle, it has been held each year and grown in popularity. This year’s race is the 83rd and marks the 150th anniversary of the event, making it the second oldest sailing race in the world after the America’s Cup, which started in 1851.

All 16 contestants are historic craft; although not competing this year Cabby is the last wooden Thames barge to be built, in 1928 (another historic connection with Shipowners, which insured her from 1930 until recently).  These evocative vessels are survivors of a fleet once 5, 000 strong; Dawn was featured in the recent TV series with Griff Rees-Jones; Cambria was built by Everard in 1906 and has been completely restored recently and is now showing remarkable speed in the races and Mirosa is one of the oldest sailing barges still in commission. The average age of the competing barges this year is 105 years.

The Match will be attended by those well-known in the world of sailing and representatives of the firms and families with historic ties to the race including Michael Everard, the Match Chairman; Sir Robin Knox-Johnston, who will be presenting the prizes; and Paul Goldsmith and Jilly Hemmings (nee Goldsmith), Match Patrons and grandchildren of E J Goldsmith whose company owned the largest ever fleet of Thames Sailing Barges.

The Shipowners’ Club, has supported the Thames Sailing Barge Match for many years. This year it will again be a joint sponsor of the race and the Shipowners’ Club Cup is first prize in the Champion Staysail Class.

The Club’s connection with this sailing match goes back a long way. Shipowners was established in 1855, the same epoch as the Match. It also shares a long-standing connection with F T Everard & Sons Ltd, one of the key players and supporters of the race, who insured their fleet with the Club from 1880.

Rob Cook (Syndicate Manager) and Mark Greenland (Underwriter) will be attending on behalf of the Shipowners’ Club, joining the guests of honour and other sponsors aboard the Motor Yacht Lady Hamilton.

The race, which takes place on Saturday 13th July, starts at Mucking, Essex between8.30 and 9.00 am and follows an eastward course towards the South East Leigh Buoy in the Thames Estuary, where it turns back up the Thames to pass by vantage points at Gravesend Promenade, Greenhithe Riverside Walk, Erith Promenade and Pier and on the north bank, Grays Promenade (via Wharf Road) and the Royal Hotel Purfleet between midday and 4.30 pm.

The Shipowners’ Club is a mutual marine liability insurer, providing Protection & Indemnity insurance and associated covers to smaller and specialist vessels since 1855. The Club currently insures nearly 33, 000 vessels from over 6, 000 Members worldwide and is a member of the International Group of P&I Clubs.

The Club has offices located in Luxembourg, London, Singapore and Vancouver.