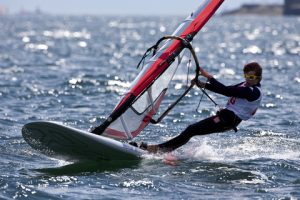 As defending champion Sills will head to Limassol, Cyprus aiming to replicate her 2012 performance from Dublin Bay, Ireland.

Sills flew out of the traps at the 2012 edition winning four of the first six races to open up a strong lead at the midway point. As her opponents rallied Sills remained consistent to secure the title by 12 points.

“I’m really looking forward to going back and competing against the world’s best and seeing what happens, ” said Sills whose performances in 2012 culminated in her being nominated for 2012 ISAF Rolex World Sailor of the Year. “It’s really nice that all happened last year but to get that all again I’ve got to keep winning so we’ll see what happens. Hopefully I’ll get another year like it.”

Sills has started 2013 well with a bronze in the senior fleet at the Sail for Gold regatta in Weymouth, Great Britain as well as a bronze at the RS:X Open Youth European Championship. Despite her success she isn’t expecting an easy ride in Cyprus, “I think the door is wide open because in Dublin the conditions were what I train in at home and I don’t think the conditions are quite the same in Cyprus so we will see. It will be fun though.”

The Girls windsurfer title has been defended by Natasha Sturges (AUS), Amelie Lux (GER), Zofia Klepacka (POL) and Laura Linares (ITA) since it was first introduced to the program in 1987. Sills will be hoping to add her name to that list and knows she may be kept an eye on as defending champion, “Everybody that goes there wants to win it so I don’t think it will be anything personal, ” she laughed, “hopefully not. I think they will all want to win.”

Set to challenge Sills for the title will be Israel’s Hadar Heller. The Israeli sailor won gold at the RS:X Europeans beating Sills, who finished third, by 16 points. Despite a shaky start Heller was strong towards the latter stages of the event which was enough to stand atop of the podium ahead of her rivals.

The RS:X Boys field will be wide open with plenty of sailors in the fleet capable of taking gold with good experience behind them.

Argentina’s Bautista Saubidet recently won gold at the RS:X Open Youth Europeans in Brest, France as the top six featured five of the competitors set to sail in Limassol, Cyprus.

On his victory ahead of the Youth Worlds Saubidet said, “That was a best feeling I ever had. It’s incredible to on top of the podium representing your flag. When I crossed the finish line in the last race I started crying because of the happiness.”

With a strong performance in France the Argentinean is confident he can carry that over to the Sail First ISAF Youth Worlds, “I was sailing very fast there so I hope to do the same, ” said Saubidet. “Every Championship is different and this is one of the hardest ones. I will go out and do my best and try to win because winning a gold medal in the ISAF Youth Worlds is one of my biggest dreams.”

Saubidet sailed at the event last year finishing eighth and has put in some long hours to push for a 2013 podium finish, “I have been training so much for this Championship. The last three months I trained very hard in the gym, running and trying to get better every day on the water. It was very hard for me because most times of the year I train alone and it’s hard to improve.”

Great Britain’s Kieran Martin won bronze at the Singapore 2010 Youth Olympic Games and will be looking to draw upon lessons learnt from Singapore as well as a ninth at the 2012 Youth Worlds, “That [Youth Olympic Games] was a great experience in terms of having all the people around, ” said Martin who is also a former Under 15 and Under 17 Techno World Champion.

Martin was hit and miss at the 2012 ISAF Youth Worlds and alongside eight top ten race finishes he was black flagged twice and on the course side once to count maximum points on three occasions. “I’m really looking forward to having another crack at it, ” added Martin, “I messed up a bit last year but I’ll go back and do it all again.”

Yago Carvlho (BRA), Ignacio Berenguer (MEX) and Oleksandr Tugaryev (UKR) all finished in the top ten in 2012 and will also be contenders for the top honours.

Editorial rights free images will be available during the event via ISAF’s Flickr stream at http://www.flickr.com/isafmedialibrary