Details:
Armed pirates in two speed boats approached and boarded and hijacked a product tanker. They took hostage all crew members, stole their personal belongings and ordered the Master to sail south and then north towards the Togo/Benin border where they disembarked and escaped via a speedboat, 12nm from the coastline. The Togo Navy was informed about the hijacking and a patrol boat was dispatched which escorted the tanker to Lome anchorage for investigation. Two crew members were injured during the incident and were transferred to a clinic for medical attention.

Details:
Pirates boarded and hijacked a tanker underway. All authorities in the region were informed and kept updated of the incident by the IMB PRC. The vessel was released on 22 July 2013 off Nigeria. All crew safe. 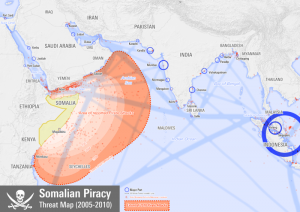 Details:
D/O on board a chemical tanker underway noticed a number of echoes at a distance of around 3nm on the radar. The on board security team took their position and non-essential crew mustered in the citadel. The D/O and guards noticed three skiffs, in between 16 skiffs, approaching with weapons and RPG with a CPA of one cable. Ship’s whistle was sounded but the skiffs continued their approach and the security team fired warning flares resulting in the skiffs moving away.

Details:
Duty Officer on board an anchored bulk carrier spotted an unlit skiff with 5-6 persons approaching. The D/O directed the ship search light towards the skiff, raised the alarm, activated the fire hoses and called the Togo navy. It was observed that the robbers, with hoods pulled over their heads, were attempting to board the vessel using a pole and hook. Three flares were fired in the direction of the skiff. Seeing the crew alertness the robbers aborted the attempt and moved away. During the incident another two skiffs were observed close to the vessel. Later a navy boat arrived at location.

Details:
About eight pirates armed with guns and long knives in a speed boat boarded a tug underway. They cut off the cables for the communication equipment, stole crew properties, cash money and escaped. One crew has been reported missing.

Details:
Around 20 armed robbers in a speed boat approached and boarded a landing craft underway. They stole crew personal belongings and escaped. Port maritime authority notified. No injury to crew or any damage to vessel.

Details:
About ten robbers armed with gun and knives boarded a general cargo ship underway. They entered the bridge and assaulted the Master who managed to escape and stop the engine. The robbers stole crew personal belongings and cash and escaped. Master sustained minor injuries to hands.

Details:
Five robbers in a small boat approached a berthed product tanker. Two robbers armed with knives managed to board the tanker using a rope while the remaining robbers remained in their boat. Duty A/B, on deck watch, noticed the robbers and informed the duty officer who raised the alarm. Crew mustered and approached the robbers with wooden sticks. Upon seeing the crew alertness, the robbers jumped overboard and escaped empty handed.