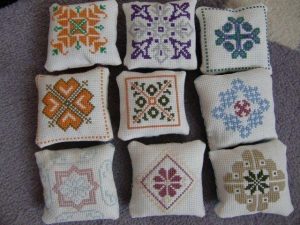 Hanna Harri, an enterprising resident of Tampere, the second largest city in Finland, plays a fine hand of dominoes – she converts the tiles that are made for shuffling across the games table into delicate works of art.

She can be seen on Sundays in warm sunshine, tending a sales stall at the popular summer craft market at the city’s Laukontori Square, a few paces from the departure quay for fetchingly fitted-out lakes ships bound for Hämeenlinna, famed for its associations with Sibelius, and other destinations. 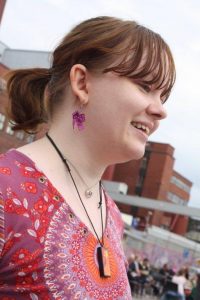 Among her latest creations are domino necklaces with adjustable leather cords. The rectangular tiles feature pretty owls and matryoshka dolls, and short mottoes: “unknown power, ” one is felicitously labelled.

Hanna’s devotion to domino decoration dovetails with her commitment to recycling – fittingly for a citizen of Tampere, a municipality encompassing forests, lakes and waterfalls which has reprocessed its strong industrial heritage by turning its redbrick factory buildings into cultural and craft attractions. 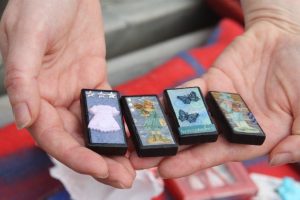 While the clatter of dominoes in many parts of the world, in haunts from British pubs to Chinese parks, might be short of romantic association, a mystique does surround the origin of the game. A domino set was reportedly found in the tomb of King Tutankhamen, but no records survive of the pastime for a period of 2, 000 years after his reign, until it became popular in Italy and France. Some say that the word domino is associated withVenetian carnival masks known as domini, or with the hoods of Dominican monks. 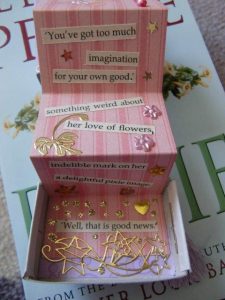 Besides scouting the shops for boxes of lightweight dominoes, Hanna dices other mundane objects into objets d’art. Among them are bottle caps metamorphosed into beautiful brooches, and “matchbox books, ” empty matchboxes containing tiny stories. Each story is embellished with paper patterns. The words are snipped out from discarded paperbacks, lending an engaging fancy to the page.
Asked by this writer to tell her own story, of how she came to pursue such ingenuity in her craftwork, Hanna swiftly responded: “Challenge accepted! Some years ago I suddenly came upon several tiny containers of seed beads. Next thing I knew, my big sister had supplied me with instruction booklets for little creatures that could be made out of the beads!

“I loved that tiny detailed work; it makes you precise and careful, ensuring that your beads aren’t all over the floor. My sister and I did a small tour at local and not so local hospitals selling our crafts. In Finland, some hospitals allow people to sell crafts and one in particular became our absolute top seller!”
After Hanna completed the Finnish equivalent of high school, her mother suggested that she apply to a school which trains silversmiths. “Silver began to fascinate me, and I wanted to make jewellery more than anything.”
First, she qualified as a metal and stone artisan, and that was followed by two years of silversmith training, to achieve an artisan silversmith degree. This took five years in all, and the last year was particularly hard. 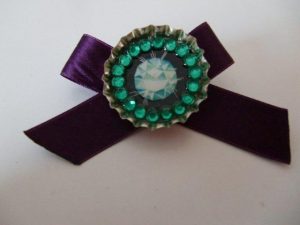 Harsh economic realities meant that her ambition to start her own business was put on hold. Nevertheless, “I continued tinkering with various materials. I once saw the words ‘matchbox book’ on the internet and they stuck in my mind. I bought some blank matchboxes and after a few mishaps and errors, I developed my idea of a matchbox book.
“Domino pendants I also saw online, and immediately bought two boxes of dominoes. I started making pendants, not even knowing what other crafters were using – I just jumped into it! I also make cross-stitched items, like bookmarks and small lavender-scented cushions.”
Hanna insists: “Wherever possible, the materials I use are recycled. Just about anything can be re-used. I have been so happy about rescuing an old Norwegian butterfly book from a trashcan: even though the book was unreadable and in a poor state, the beautiful pictures live on decorating magnets!” Her craft ideas are summed up in one word: unique. “The items I make never have a duplicate, just as there is never a duplicate of the person who looks at and buys my items. I always tell my customers that of the several domino pieces on display, there will be one for you!”

She says: “If I sell even a little, the day has been a success. This is something I do to cheer myself up, and hopefully in the process, the customers. I simply love my customers and nothing makes me happier than to share a few words with absolute strangers.
“My favourite reaction from a customer is a pure and simple: ‘Oh that is so pretty!’ I will never get tired of hearing those words!”

Hanna is engaged to an American who lives in Texas, and plans eventually to move there. She is looking for a permanent job, “but in the meantime, I am selling my crafts and having a hell of a good time doing so! There is never stress in making my items or in selling them; to me it’s just pure joy!”
Hanna’s craft blog is at http://parasolla.tumblr.com and her matchbox books can be seen athttp://etsy.com/shop/parasolla
Facebook http://www.facebook.com/parasolla  and  Twitter http://www.twitter.com/parasolla