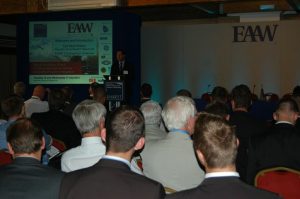 Over 125 delegates and speakers from Germany, Greece, The Netherlands and the UK gathered recently (16-17 July) in Bristol for the Engine As A Weapon International Symposium (EAAW V), the fifth in the biennial series organised by the Institute of Marine Engineering, Science and Technology (IMarEST), an event that was met with broad acclaim and marvellous weather.

The level of presentations and discussion was high, with opening morning featuring a keynote address delivered by Dr Mark Townley, Combat Systems Director, BAE Systems Maritime – Naval Ships, UK on the symposium’s theme ‘Delivering Military Effect: A holistic approach to combat and platform system integration’. Cdr Neil Gibbs and Cdr Jeremy Bailey, Ministry of Defence then responded to the question ‘The Ministry of Defence Marine Systems Development Strategy: A vehicle for fully harnessing the resources we have?’ 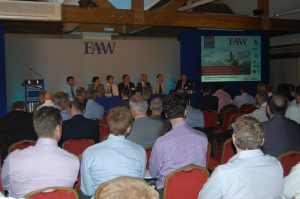 Another lively discussion rounds off a highly successful day one

Dr Graham Wallis, MBDA then chaired the ‘Future Platform Systems’ session before the networking lunch on the first day, after which Lt Cdr Ian Hassall RN, Ministry of Defence took the chair for the afternoon session on ‘Military Effect’.  At the end of the first day a reception and symposium dinner took take place in the magnificent Dining Hall at Wills Hall.

The second day of EAAW V saw Lt Stefan van Osch RNIN, Ministry of Defence, UK chair the session devoted to ‘Complex System Integration’ throughout the morning; and after the networking lunch ‘Future Combat Systems’ came under the symposium spotlight in a session chaired by Oliver Simmonds, GE Power Conversion. The symposium ended with the Symposium Summary by Rear Admiral Nigel Guild CB FREng, Chairman of the Engineering Council and a Past President of IMarEST.

“This is the 5th time that I have had the privilege of Chairing the IMarEST EAAW Symposium, which seems to go from strength to strength, ” says Cdr Matt Bolton RN, EAAW V Symposium Chairman.  “Wills Hall is an exceptional venue which provided an exquisite backdrop to a fascinating technical programme and enabled the most vibrant networking.  I am extremely grateful to the organising team and all of the contributors for making EAAW V such a resounding success.”

Networking is key to a successful event, and in addition to the symposium dinner and lunches, EAAW V got off to a flying start on a perfect British summer’s evening with a barbecue held the evening prior to the opening of the seminar in the quadrangle at Wills Hall, of which Sir Winston Churchill said when he opened it in 1929: “I Winston Spencer Churchill MP, Chancellor of the University of Bristol, Declare there be no Finer Hostel than Wills Hall among the Universities of the British Empire”.

Feedback from participants, who included government, navies and naval procurement officials, at all levels between Lieutenant and Rear Admiral; and from the commercial world a range of companies from prime contractors to SMEs was fulsome in its praise. It included such comments as:

“It is always a delight to receive such positive feedback at one of our events, ” says David Loosley, Chief Executive of IMarEST. “I congratulate Matt Bolton, his committee and all involved with the organisation of EAAW V, and know that delegates, speakers, sponsors and supporters all look forward to the next event in the series which will be held in 2015.” 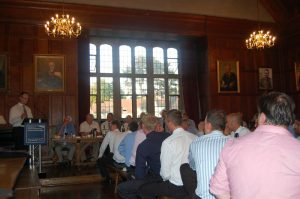 EAAW V was held under the patronage of:

The symposium was sponsored by Babcock International Group, Imtech Marine Ltd and GE Power Conversion (all of whom exhibited at the event) and was supported by the IET, ONR, SNAME and SUT.