Prospects are high for coastline surveys to strike gold in Cornwall 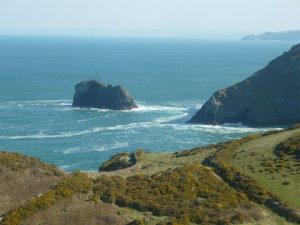 The coast of Tintagel, Cornwall

A new and exciting project has been launched that will build on Cornwall’s proud mining heritage with an ambitious proposal to recover tin deposits from the waters off the North Coast of Cornwall.
Marine Minerals Ltd (MML) is a Cornish company created to investigate the viability of this project and Coastline Surveys was asked to play a major role in the early investigative surveys to establish the characteristics of the mineral bearing sands off the coast of St Ives on the Northern peninsular of the county.

Earlier this year Coastline’s specialist 24m survey vessel MV FlatHolm, carried out extensive vibrocore sampling of the seabed in three specified areas off the coast between Perranporth and St Ives.  The recovered cores will be used to assess the extent and quality of the tin deposits lying within the seabed sediments. This particular survey was challenging and required the sector-leading power of the C-COREHP in order to maximise penetration into the dense seabed. The site was predominantly compact sands overlying bedrock in places with coarse gravel, cobbles and subangular granite pieces.

The team successfully overcame the rigours of this demanding environment and completed the workscope of 40 core locations in only three days exceeding all expectations of Marine Minerals and its team.

Coastline Surveys will work extensively with Marine Minerals Ltd to support further investigations including a full and detailed environmental and social impact assessment, all of which is expected to run for another year.

New IFRS for consolidated accounts could raise issues for shipping

Institute of Export expands its Foundation Degree in Professional Practice in International Trade, in drive to boost export skills