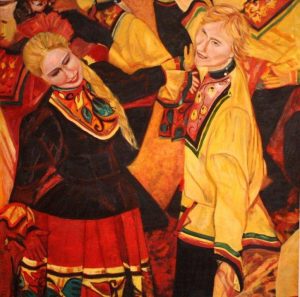 Sini Tuomisalo hits the high notes as she sways from classical Russian songs to bossa nova to charm audiences in her native Finland,  By James Brewer

Born in the jazz festival city of Pori, the singer Sini Tuomisalo is fond of the nearby island of Reposaari, where she attended her first schools and where she now has a rehearsal room and her music files.

With the advantage of a deep natural harbour, Reposaari became an important port in medieval times and Hanseatic traders used it to access Pori and other Finnish towns via the Kokemäenjoki river. A good deal of the American movie White Nights directed by Taylor Hackford was filmed at Reposaari in summer 1984. Stars included Russian ballet dancer Mikhail Baryshnikov, Isabella Rossellini (daughter of Ingrid Bergman), Helen Mirren, and tap dancer Gregory Hines. Sini worked with her high school friend in the production office as a casting assistant. The film production team stayed in Reposaari for more than three months.

Sini’s beloved Reposaari Church was built in 1876, from money donated by Norwegian seafarers. In the churchyard is a memorial by sculptor Wäinö Aaltonen to the 53 men lost when a torpedo boat was sunk nearby on October 1925 during a fierce storm. The church achieved national prominence in 2009 when it was the venue for the wedding of the Finnish president Sauli Niinistö to his second wife Jenni Haukio. 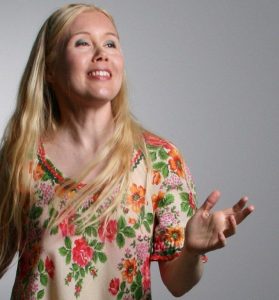 Sini has just recorded a new album in the centre of Pori, backed by a fine studio band of jazz musicians from the city. This featured three of her new songs (music and lyrics): one bossa nova, one jazzy waltz and one Cuban style cha-cha. It includes songs she composed for a musical comedy Summer holiday she wrote for an open air summer theatre in Espoo, a city near Helsinki. These are in a 1970s style.  “The whole idea of the new CD is to give happy summer music to my listeners.” The cha-cha has lyrics in the Pori dialect, which has been described as “not the prettiest dialect in Finland, ” but the number has a good chance of becoming a hit in the Pori area. “I want to make another CD in the near future and that has to be Russian and Soviet-time music.”

With her group Blue Bossa, she recorded two albums including her own songs in 2003 and 2004, and a third album in 2008 of songs of the Armenian composer Arno Babajanian.

Her home town was where she graduated in music from the Palmgren Conservatory (in another strand to her career, she graduated in travel and tourism  from a commercial college in Turku). Before going to kindergarten she was already singing; “and I refused to fall asleep if my mother didn’t sing me a lullaby. To me there is nothing more important than music.”

She had three years living and studying in Italy, and is now re-established in Pori, working as a cantor in masses, weddings and funerals, singing in concerts and giving private lessons.

“I want to be close to my audience and be like a story teller to them. To let the listeners experience their feelings – happy, joyful or sad and painful moments of life. My existence sort of disappears – it is not Sini on the stage, but a story teller.”

She frequently works with the Finnish-Russian Association, which will have its 70th anniversary next year, and has been asked to tour Finland performing Russian music.  I will do music evenings, accompanying myself with the piano and accordion. I will sing 50 % in Russian and  the other 50 % in Finnish. Those Russians who now live in Finland and have learned Finnish have been complimentary about how I treat the original lyrics in my translations. 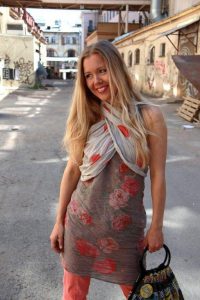 Her admired musicians include film composers Andrei Petrov and Mikael Tariverdiev, and Aleksandra Pakhmutova for her hit songs of Soviet time. Of classical composers her favourites are Tchaikovsky and Glinka, and especially for their romances Sergei Rachmaninov and Aleksandr Dargomyzhsky.

Sini’s musical idols include baritone Dmitri Hvorostovsky and her former professor, Ms Gorokhovskaya. “I admire how much they give of themselves to the music. Every single note or syllable they sing is significant. In general I find that the Russians (musicians, singers, artists, circus performers, ballet dancers and so on) feel their art so strongly that their performances take my breath away. I hope that I have injected some of this profound commitment into my technique: I cherish the words when I sing them and I think that I have the kind of voice where this helps a lot.”

“Why do I love Russian and Soviet songs? Every time I have the sheet music in front of me, sit at the piano and start to play and sing, I feel so good. The music and the language suit me. For me it is comfortable to sing in Russian. As my natural speaking voice is quite low, it is easy to pronounce the vowels which in Russian come from deep in the throat. I feel more relaxed, more powerful, and confident in my talent, when singing in Russian. I can sing the higher notes more freely than in other languages. I become more alive.

“The way the Russians compose music, they move the melody along very logically. They use a lot of the minor in music as we Finns do, but the Finnish minor is very sad and almost tragic. The Russian minor is romantic and lends hope.”

On a personal note, Sini added: “My mother’s mother was born in a village in Karelia. In World War II when the Finnish Karelians had to emigrate from there, my granny moved to northern Finland. Her character was really Karelian, joyful, happy, she sang and used to play the Finnish national instrument, the kantele. I guess I have some of her characteristics. I’m certainly not a typical person from Satakunta, the western part of Finland where I live now. People from Satakunta have a reputation for being rather quiet, and lacking passion.”

On that note, she sends this message to our readers: “I really look forward to seeing you at my concert appearances!”

See more about Sini on www.sinifinka.wordpress.com  and The melodious mission of Finnish songstress Sini Tuomisalo: encouraging cultural understanding among nations elsewhere in www.allaboutshipping.co.uk