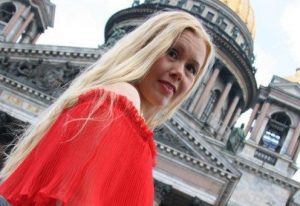 As a versatile mezzo-soprano, Sini Tuomisalo turns her exuberant and melodious voice to account as a bridge between nations. The Finnish vocalist has a mission to familiarise audiences with music little known to them. In particular, a key part of her diverse repertory is aimed at encouraging harmony between the peoples of Finland and Russia, whose fate has been intertwined on many fronts, with years of resented Russian rule followed by a Soviet invasion that cost the smaller nation a vast tract of territory.

We encountered Sini and learned of her remarkable range of musical interests – from classical lyrics to Soviet popular music, from bossa nova to jazz and gypsy romances, and to her own songs of the sea  – one summer day when she was guiding tourists in the octagonal wooden church on Reposaari, an island in the west of Finland with a strong maritime history. The quiet town was once Finland’s busiest port on the Bothnian coast. Connected by causeway to the mainland, it is these days home to a small fishing fleet. 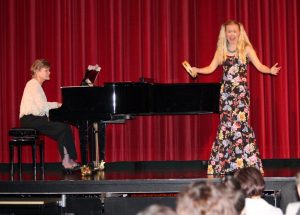 The very moment of our meeting was enchanted by the warm and velvet vocal timbre of this zealous artist:  explaining that a few days later she would be giving a recital, she hastened along the church aisle to climb aloft to the organ. There, she struck up sweet accompaniment to her clear articulation of pure and simple verses.

Her beauty of tone finds full reign in her passion for ancient Russian romances and songs of the Soviet era. She has been singing them regularly in concerts for 10 years. “I studied in the St Petersburg Conservatory from 2004-08 and fell in love with the Russian romances. It was my professor, Yevgenia Stanislavovna Gorokhovskaya, who suggested that I concentrate on romances.

“I have this big mission in my heart to give Finnish people more knowledge of Russian and Soviet-time music. Although we are neighbouring countries, Finns still know very little of the wonderful Russian music. We know the most popular folk songs like Kalinka, Katysha and the hits of Alla Pugatsova and a few Soviet-time hits but that’s practically all.

“Hardly anybody here performs Russian classical, ancient or gypsy romances. It is not easy as the Russian language is so difficult for Finns. And without being in Russia and studying Russian music there it is quite impossible to understand how to perform that music. So I’d like to perform more in Russia and former Soviet countries and sing nostalgic songs of the 1960s–1980s. Some of the film and concert songs from that period I have translated into Finnish.

“This is my modest message to Russians and Finns: that we value each other, we want to know each other better. I want to give beautiful Russian songs for Finns to listen to.

“Although not very many people can understand Russian in Finland, this is changing. Especially in eastern Finland, children can choose to study the Russian language in secondary schools. Through translations of Soviet time nostalgic songs, Finns can understand more.

“I have found many similarities in the Russian and Finnish traditions: this particularly applies to our ballads known as laulelma (I guess there is no exact translation for this word: laulu is a song and laulelma is a smaller song which usually has very significant lyrics while the melody can be quite simple). We have a lot of laulelma that tell of the sea. I have recorded one album that contains only this kind of Finnish songs of the sea, and composed my own songs about the sea.

“Some laulelma have the same kind of motives and melancholy as some Soviet-time film songs and concert songs. Concert song is stage music, requiring particular professional abilities and talent from the performer. They are not just popular hits but have deeper meaning. One example is the version I did for YouTube of Rakastan,   by an Armenian composer named Arno Babajanian. I translated it into Finnish to record his music in St Petersburg in 2008.

Sini Tuomisalo accompanies herself on the church organ

“In addition to singing more Russian and Soviet-time music to Finns I should like to perform more of this music in Russia itself.

“A leading Finnish actor, Ville Haapasalo, also has this mission to further good relations between our countries. He makes a lot of films in Russia and is very popular not just there but in other countries of the former Soviet Union. He loves Russian culture and people, as do I. I’m immediately on the same level with a Russian person the minute I start to speak to him or her.”

Sini recalls her vocal lessons in the St Petersburg Conservatory as being tough. “The educational system varies greatly from the Finnish one. You don’t give your opinion in class: you are there to sing. One day, the tutor gives you a new song or aria to learn. Next day you are already supposed to be able to sing it quite well. If you do not then they want to know why. You always have to give your best as though you were singing in a concert. The classroom door regularly opens and closes: other professors, pupils or visitors pop in and out. Not so in the Finnish conservatories: you have your private lesson and no-one disturbs you.

“At first I felt this was really strange, or at least I was not used to it. I heard how excellent all the girls were in my professor’s class and I felt the adrenaline, my heart pounding wildly, throat getting extra dry. I sipped from my water bottle, noticing that no-one else was carrying a bottle. They were not even allowed to drink there, it was just non-stop singing… the scales were long and the professor sang several melodies in a row. I couldn’t remember even the first one.

“I spoke hardly any Russian when I started studying there. Luckily our accompanying pianist spoke German and we had a mutual language. I started taking Russian lessons in the Conservatory. During those years I also worked in the Finnish primary and secondary schools of St Petersburg teaching music, drama, art (drawing) and gymnastics. I’m not a professional teacher so it took me a great deal of work at home to plan the lessons.” She worked in the Finnish Music Institute in the same city, giving classical vocal lessons, and had private pupils.

“So demanding were the lessons in the Conservatory that my body reacted to it. I was eating the wrong food because I was always in a hurry getting from one place to another. This made it difficult to sing well because my diaphragm was hard and affected my breathing.  The professor was yelling at me when my singing didn’t sound free and relaxed. I still have a very restricted diet. My favourite food is definitely porridge made from oats: my stomach loves it.

“I also suffered from the dirt and dust of the city traffic, plus everybody in Russia seemed to smoke everywhere. It gave me ‘flu and my professor told us students that we should not go walking in the streets as St Petersburg is so dirty. But I love long walks!”

In fact, Sini lived only five minutes’ walk from the Mariinsky theatre, “and must admit that I went to a concert or opera there or at the Conservatory every week.”

See Sini ‘s website www.sinifinka.wordpress.com  and a second article (Sini Tuomisalo hits the high notes as she sways from classical Russian songs to bossa nova to charm audiences in her native Finland) www.allaboutshipping.co.uk about her passion for Russian music.