Drawing and dance: the fine lines in the artistic career of London painter Cinzia Bonada 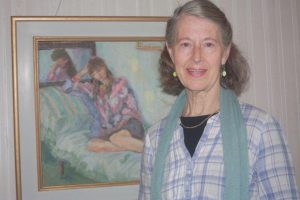 Drawing and dance: the fine lines in the artistic career of London painter Cinzia Bonada,  By James Brewer

Fascinations with ballet (in her youth she caught the approving eye of Dame Margot Fonteyn), and with the relatively free style of Greek dancing, and with painting, especially portraiture, have emblazoned the career of Cinzia Bonada. Resident in the London borough of Richmond upon Thames, Cinzia is best known now as a successful exhibitor at Royal Academy summer shows and member of the Royal Society of British Artists (RBA).

Her work is seen at many other exhibitions, and is in the Museum of Jersey, Channel Islands. As a founder member of the Small Paintings Group, formed 20 years ago for the greater recognition of those who paint on canvases of modest scale, her support for her fellow practitioners has been manifest . 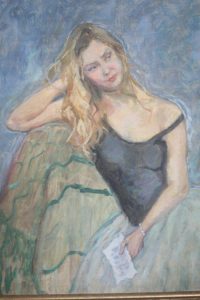 She receives many commissions, but much of her work is rendered quite informally. Whenever she travels by Tube, she has a pencil and scrap of paper handy to sketch passengers in the carriage – if they notice her, her subjects might guess that she is simply jotting down a shopping list. Always intensely involved in her portrait work, she admits: “A little bit of your persona goes into that portrait. I only feel satisfied when I have captured an expression that I know in the sitter.” Fondness for antiques and still life subjects are strikingly evident in her other works.

Her devotion to drawing and painting developed at a time when she had established herself as a dancer, a key point in her unique story. 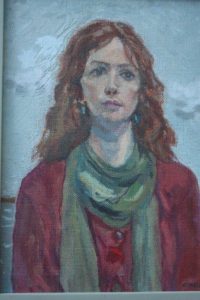 As a baby, Cinzia (born as Cynthia Carlile Boyd) was taken by her parents from their home in Jersey to the mainland of England to escape enemy assault during World War II.  Luckily, the family found passage on a coal-carrying ship. After the war she returned to the Channel Islands to attend school and at the age of four already found “that my absolutely sole wish was to become a dancer, ” although it was a while before she was able to pursue this desire.

On Sundays, wearing a yellow tunic, she would dance barefoot on the firm sandy beach at Grève d’Azette, which has been a symbol of Jersey’s maritime heritage. Her ‘stage’ for these impromptu twirls formed part of a natural harbour that in the 19th century supported a flourishing shipbuilding industry. The beach was a perfect place to practice the “flying skips” of Greek dance she enjoyed and “which is much freer than ballet, ” matching her free spirit. The two dance forms are quite different. “In ballet you have to turn your feet out. In Greek dance your feet remain straight.”

Cinzia began ballet training in earnest at Jersey Academy of Dancing which had been established by Valerie Guy BEM, and she won awards at Jersey Eistedffod for dance and for elocution.  One approving adjudicator tried to entice her to apply to her particular school on the mainland, but Ms Guy preferred that she went to her old school, winning the argument , so Cinzia left to study with Noreen Bush at the Bush-Davies School, East Grinstead. “There followed the happiest years of my life, at the age of 14 to 16.” She loved the shows at Bush-Davies, including being given the role of the Good Fairy in Cinderella. 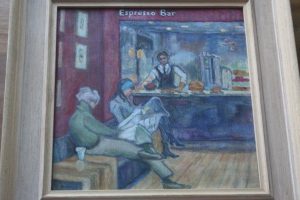 At that school, Cinzia gained what is known as the Solo Seal, and won the silver medal in the prestigious annual Adeline Genée Medal Competition, the Royal Academy of Dance event which was staged at the Criterion Theatre, Piccadilly. One of the seven judges was Margot Fonteyn, who was to have presented the prizes. Dame Margot watched all the entrants’ solos, including Cinzia’s performance for the first three minutes, then had to dash to catch a plane to see her husband in Panama. So the award was presented by Phyllis Bedells, another distinguished figure in the ballet world.

Cinzia that day performed a set classical solo en pointe and a dance specially choreographed for her. “Because my real name is Cynthia (goddess of the moon),  Noreen Bush had created a lovely moon dance to La terrasse des audiences du clair de lune by Debussy, played by a wonderful pianist from the Bush-Davies School. “A few bars from the end of the moon dance, my shoe slid from my heel, but I managed to carry on bourrée-ing into the wings.” 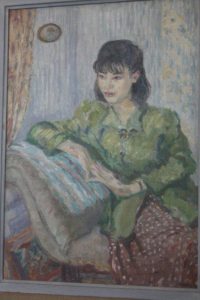 Aya reclining in the studio. Oil. By Cinzia Bonada

In a further endorsement of her talent, she was accepted by the Royal Ballet School, but after a year, it was clear that she was growing too tall for the requirements of its companies. She joined what was known as the Charlie Ballet, and worked abroad including at the Brussels Fair, then for nine months in Italy for the show L’Adorabile Giulio.

At that time, Cinzia took up drawing “which had not been my métier” and then painting.  She had joined one male and three classically trained danceuses who were chosen by choreographer Bernard Hall for a show with gorgeous costumes designed in Paris. “All the girls loved to draw – we drew each other at first, portraiture. I have always loved portraits.”  The quintet performed at Cannes and at Monte Carlo, where she met her husband, the late Johnny Bonada, who later became chef d’orchestre.

After marrying, they did a great deal of travelling for Johnny’s work, including the United States where he accompanied the French singer Vicky Autier, arranging her songs to the admiration of her husband Monsieur Astruc, artistic director of the Sporting Club in Monte Carlo. Engagements in Washington DC and Montreal were among the highlights of those years. “Then we came back to Europe – I was called back to dance by Bernard Hall.”

They returned to their home in Nice, by which time they had two daughters, and a son on the way; and in 1968 moved to England, where Johnny found work as chef d’orchestre in leading London hotels.

In addition to looking after her three children, Cinzia was able to further her painting skills. She joined Charles Fowler’s classes at Richmond Adult College, and later in South Kensington attended classes with Peter Garrard, a member of the RBA who was later became president of the society – “he was a great influence on me.” She became a full member of the RBA in 1993. In 1975, at the first time of entering, she had an oil painting accepted for the Royal Academy summer exhibition – of Le Petit Chalet at the edge of the beach in Jersey, as seen from a hotel window. 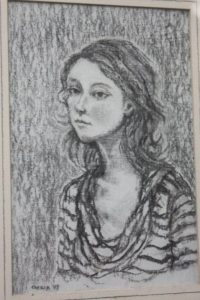 Wisely, her friends urged her to enter more fine art shows; since then she has had five other works accepted by the Royal Academy summer exhibition, and has exhibited with the New English Art Club, the Royal Portrait Society, and the Pastel Society.  She joined the Hesketh Hubbard Society, of which she is an honorary member.

This year, at another first time of entry, one of her works was highly commended in the Tabernacle Competition at MOMA Wales (the Museum Of Modern Art, run by the Machynlleth Tabernacle Trust). This is a charcoal drawing, titled Overgrown, depicting her daughter Jenny in the family garden at Powys. With the theme of The Garden, the exhibition of entered works continues until August 31 2013. 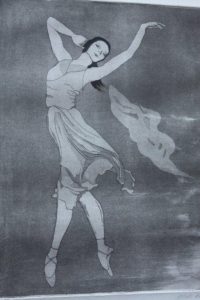 Cinzia has another connection with Wales: her son John Bonada has his own canal barge building company at Oswestry.

Cinzia is addicted to classical music, tuning most of the time to BBC Radio Three, and writing at the back of her address book the titles of pieces she loves. “Recently I thought I had lost my address book and was panic-stricken – not so much for the addresses I had lost, but for the music.” She lists musical discoveries “so that I can pass them on to my daughter, who is also a classical music lover: she manages to listen to them online.”

The music infuses Cinzia’s brushstrokes, augmenting her natural sense of line, in turn invigorated by her dancing years. The rhythm complements her use of lively sense of colour. “I love colour – it is very important to me in my work.”

HSH Nordbank participated in the refinancing of Euroports