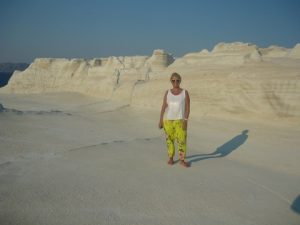 No, its not New Mexico; simply the Sarakiniko at Milos! 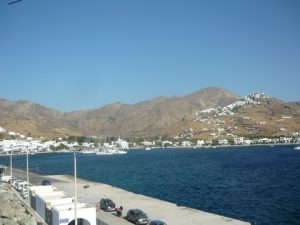 Aphrodite is being claimed like Homer, for whom seven Hellenistic cities lay claim as their native son! The world says that Cyprus and in particular Paphos is Aphrodite’s birthplace, but the statue of Aphrodite of Milos was indeed found on Milos island, south western Cyclades, and Miloans too have a claim! Millions view this well-proportioned super feminine-body in Le Louvre. No comparison with any other figure on earth, as the sculptor was gifted and inspired by Aphrodite’s name-shake goddess.

So, as mentioned during my 5th of July’s SBC TV interview with Lilian Margaritis, our women set sail for Milos in support of the Greek cause during these “orchestrated” days of austerity and credit crunch severely affecting the southern Med countries, Greece being one of them. I was more than impressed from the photographic work transmitted back in London from Mrs. Fond, and after the Spetses extravaganza we set sail from Piraeus to Milos with the “Speed Runner III”, a very special fast mono-hull ferry calling also at Serifos and Sifnos. 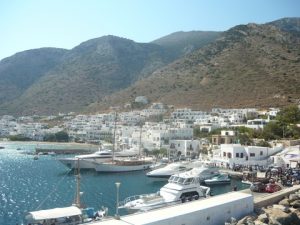 I had been once very close to Milos during my national service days …“occupying” the adjacent island of Poliegos, but never landed to Milos or Kimolos – the third in the group. I was invited to go there by my Spetses college-mate Ulysses Kyriacopoulos, then by Gerry Ventouris my fellow shipping-studies mate (coincidentally travelling on the same boat with us, this is what I call small world), and our best man Sotiris Venardos – the last two derive from Kimolos, but never made it; finally thanks to Mrs. Fond’s discoveries, I did it last month! 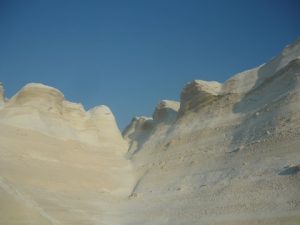 Milos, Milos, Milos, not Mount Rushmore  at South Dakota where the heads of four American presidents are carved and millions visit the monument.  In Milos too will be great, but except Ioannis Kapodistrias and Eleftherios Venizelos, who are the other two greek statesmen to be carved?

Now, what is unique about Milos is its scenery, only the Wild West can possibly match it! The entire island of Milos is a unique geological phenomenon and the pictures speak of it… and the many little ports with fishing boats, caiques, big and small yachts! 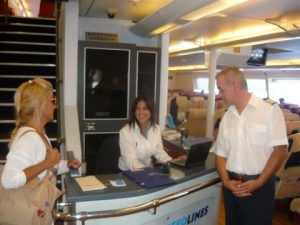 Excellent service by the ship’s crew

I guess the Greek film industry, but also the international one has a lot to gain/beneft and save money by using Milos as the set for many and variable movies!

People call Milos the rocky island – indeed you can “rock me babe” as we heard a young couple singing at night near one of the 75 wonder beaches, but definitely Milos is for lovers; a very romantic island, no wonder Aphrodite was indeed a Miloan!

Moreover the exceptional Milos cuisine, starting with the famous lobster spaghetti, the local filo-cheese pies and local meatballs, the lovely mashed fava beans, and local tiny olives, save calamari and octopus – an octopus garden like the Beatles song… Local honey for breakfast spread over “baker’s delight loafs” and baguettes, “the Ark of Tastes” brand which continues the family centuries old tradition off the “Pergola” studios at Pollonia (north-west of the island) and the delicious sweets can surely drive you mad… 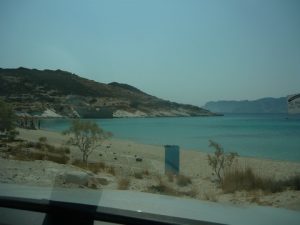 What is also unique is the seven-excursions routes, under the Miloterranean Geo Walks theme (Vani, Volcano, Sulphur Mines, Aggeria, the Kimolos round, Sarakiniko, and Nyhia). World re-known for its famous bentonite, perlite, sulphur, the kaoline, manganese and obsidian mines, Milos is worth visiting and thanks to the support and sponsorship of S&B Industrial Minerals under the auspices of the Greek Ministry of Tourism of the above, the ecstatic visitor has a life’s experience second to none! 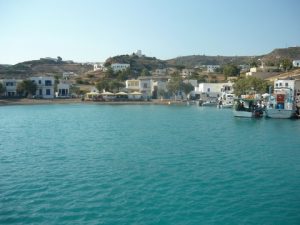 The catacombs too are unique, as well as the entire coast line of Milos.  Plaka, the capital too is unique with nice restaurants, and shops whose merchandise can drive you mad, all with their local specialities and the …mass to view the sun set! Worth having your drinks from the terrace of “At sea” bar with the most picturesque view you ever had and the sea-breeze coming up this mountainous capital of Milos. Underneath, the famous “Plakas’ Corner” restaurant-ouzerie, for those looking for the best food or meze! 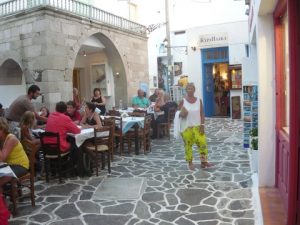 View of the capital Plaka and its restaurants

A must to have your spaghetti-lobster at the famous Muses Restaurant at Provatas (south of the island)– a bit too dear, but anyway, despite knowing Yianni* the cook we paid the damage…

Thanks to the driving skills of  Mrs. Fond, a former rallies co-driver, we managed in just three days to see most of this strange paradise – in its own right island – as the fourth day was devoted, yes devoted to Kimolos’ Prassa beach, one of the best sandy beaches on earth – on par only with Grand Bahamas’ shores! An excellent sea-crossing with the “Mantalena”, a small car ferry similar to those you come across in the US rivers, which includes also a small excursion…gratis the distance…and a light lunch at “the Wave fish-taverna” at Psathi (the main port of Kimolos) before returning back to Milos. 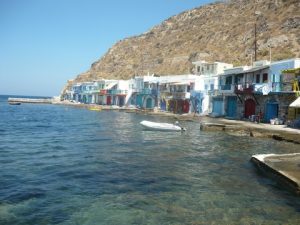 At Klima, with the famous “rimes”; you never seen anything like that – unique!

As you read these lines, two more members from our international team at www.allaboutshipping.co.uk are on the island; Panos Nikoulis with Helena Sendona, the up and coming international fashion writer and clothes designer – her lines are also a must-to-wear; watch this space! 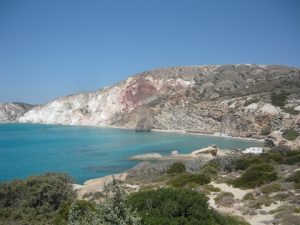 A panoramic view of one of the world’s best beaches:  Firiplaka

We met interesting people from all over the world and as said a very small world: on the way to Milos met with Maria G. Rodopoulos, another London Greek who was on board,  going to meet at Serifos her husband George, who is the president of the London-Hellenic Society; on the way back Dr. Othon Anastassakis from the University of Oxford…and now hold your breath- coincidence or not, two things upon my flight back via Oslo to London: at the Eleftherios Venizelos’ airport magazine “2Board”, the Milos saga report…next seat in the SAS plane, a couple from Norway just returning back from Milos!

N.B. Will continue the reporting from other Greek islands and of course the Greek mainland’s breathtaking spots.

* Yiannis from Epirus worked as a chef for another school mate’s restaurant, George Kypraios, at The  Bougiabessa in Mikrolimano off Piraeus.-

This Summertime the entire allaboutshipping.co.uk team is…

Good evening,
Please take a note the photo of the following beach it is not Embourios, it’s Fyriplaka.
<>.

Thank you for your attention
Milos island
Cyclades