Top Posts
Don’t take chances where your health is concerned…
RMT calls for action to protect seafarers’ mental...
Poseidonion Grand Hotel welcomes you back on May...
Large Diameter Drilling to partner with DEME Offshore...
Cyprus Ship Management Round Table Webinar and Debate
Lady Moura up for sale… plus more
Will the dollar decline? The changing landscape of...
TSUNEISHI SHIPBUILDING collects actual operation data by IoS-OP
Deltamarin is proud to be a part of...
Damen launches RoPax 6716 for the Port Authority...
Hot Port News from GAC
Home AssociationsITF Better pay for Swazi transport operators in union wage victory
ITFLabour Disputes 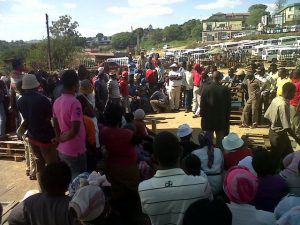 12 August 2013 – ITF affiliate the Swaziland Transport and Allied Workers Union (STAWU) celebrated a victory for road transport workers last week. STAWU recorded a 34% wage increase for trucking operators, and a 24.5% increase for road passenger operators. The settlement was part of the wage council negotiations for the road transport industry for 2013.

This increase is all the more welcome in light of Swaziland’s international reputation for trade union rights violations and its position in the ITUC’s 2013 Countries at risk report. ITF affiliates in Swaziland also report continuing legal repercussions since striking in July 2012.

The wage council in this case was made up of employer, worker and government representatives. STAWU believes that its reputation helped its members to get a fair deal, with the minister of labour and social security saying ‘Each time, when I hear that STAWU has some grievances, I always apply my mind’.

STAWU president general Vusie W Mabuza, who was among the workers’ representatives at the council, was pleased with the success, but registered displeasure at the low levels of employer compliance with such regulations. STAWU are still fighting for training and licensing centres for heavy vehicles, as licensing helps to give workers an operational legal standing, which in turn would help wage councils to regulate conditions for workers.

ITF Africa regional secretary Joseph Katende said: “This wage increase for workers in Swaziland is tremendous, and congratulations must go to STAWU for negotiating such a good deal for their members. The next step is to ensure that all employers fully comply with this kind of legislation, and a key part of this will be the introduction of training and licensing centres for heavy vehicles. We look to Swaziland’s labour commissioner to take a lead on this, and make a real difference for Swazi road transport workers.”

The ITUC’s Countries at risk report is downloadable from http://www.ituc-csi.org/countries-at-risk-2013-report-on

You can read more about ITF affiliates in Swaziland at: