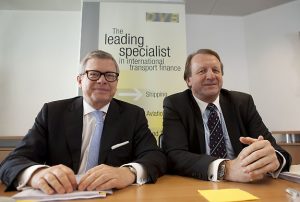 Wolfang F. Driese with Dagfinn Lunde on his right

DVB Group publishes its half-yearly financial report  for 2013: Consolidated net income before taxes of  €66.4 million (down 6.2%), due to a non-recurring  effect in the previous year

Frankfurt/Main, 13 August 2013 – DVB Bank SE (ISIN: DE0008045501) today presented its results for the first six months of 2013. Consolidated net income before taxes for the first half of the year was 6.2% lower than in the previous year (H1 2012: €70.8 million). The year-on-year change was due to a non-recurring effect in the first half of 2012: namely, the sale of a stake in British aero engine specialist TES Holdings Ltd, Bridgend, Wales, to two Japanese investors. Nonetheless, net interest income rose by 3.3%, and net fee and commission income was up 2.0%.

Wolfgang F. Driese, CEO and Chairman of the Board of Managing Directors of DVB Bank SE, commented on the Bank’s results for the first half of 2013 and provided an outlook on business developments during the remainder of the business year:

”The six-month results are within our expectations; considering the still-challenging environment shaped by sluggish global economic growth and excess supply in some segments of the shipping industry, we are satisfied with it. Yet we do not see any relief in terms of the risk situation this year. Thanks to the stable business performance of vast parts of our financing and advisory businesses, we envisage a sound result for the full year 2013, comparable to last year’s.”

Net other operating income/expenses declined from €43.9 million to
€6.5 million. The significant decline was due to a non-recurring effect in the previous year: the net figure for the first half of 2012 included proceeds from the sale of a stake in DVB’s subsidiary TES.

Net result from financial instruments in accordance with IAS 39 (comprising the trading result, the hedge result, the result from the application of the fair value option, the result from derivatives entered into without intention to trade, and the result from investment securities) once again especially reflected the high volatility levels on foreign exchange and interest rate markets. During the first half of 2013 the net figure was positive, at
€3.1 million, after a negative balance of €20.3 million during the same period of 2012.

Bestobell valves in the fast lane!