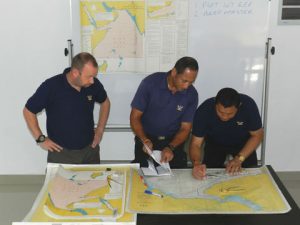 “The resurgence of Al-Qaeda and affiliate organisations is occurring alongside some of the worlds’ most strategically vulnerable and crowded waterways. The largely unforeseen consequence of the Arab Spring is that it has given terrorists groups a new lease of life and the means to do real harm to maritime activity in the Mediterranean, the Suez Canal and at other key strategic choke points, ” said Gerry Northwood OBE, COO of GoAGT.

“The growth of sea traffic has made the maritime industry a target rich environment and it isn’t just the obvious targets like oil platforms and large cargo ships which are at risk, but the cruise liner industry provides Al-Qaeda with another opportunity to hit targets where the casualty numbers could be in the thousands, ” he warned.

“A terrorist attack targeting any of these key assets could have a high impact both physically and mentally in a traditionally terrorism free environment, but would be seen by Al-Qaeda as a headline attack that would promote their cause.”

He added: “An attack of this nature could lead to significant influence on global energy security and international trade. For Al-Qaeda a maritime attack could be highly attractive, we have already seen the affect that piracy has had on the global economy and the shipping community.”

The company is basing its comment not only on the Foreign Office warning to ships transiting through the Gulf of Aden but on a number of threats coming from Yemen, Egypt and Somalia.

The situation in Yemen has escalated as a result of Al-Qaeda’s talks about a major series of attacks in the Middle East, including warnings issued by the UK Government and the Department of Transport raising the International Ship and Port Facility Security threat to level 3. More recently, Yemeni authorities claimed to have disrupted a major Al-Qaeda plot that involved attacks on a number of ports and oil pipelines in the east of the country, including the plan to sabotage a gas tanker as it left the port of Mukalla.

The latest developments in Egypt have seen a threat against the Suez Canal that resulted in bridge closures and vehicles searches for those crossing the canal via ferry. Recent arrests of insurgents indicate that they had plans and the capability to carry out attacks on Suez Canal traffic.

GoAGT now employs over 300 personnel and at any one time between 160-180 security personnel are deployed. GoAGT recruits from the UK Royal Marines, Parachute and other Army regiments with front line experience, as well as the Irish Navy, Estonian Army and Filipino Marines.