Unions fight for better railways as fares set to rise 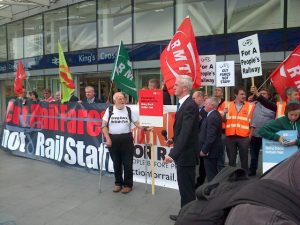 13 August 2013 – ITF affiliates joined forces with community campaigners and passenger groups across the UK to fight for better railways and renationalisation on Tuesday 13th August.

The Trades Union Congress (TUC) Action for Rail campaign demonstrations were organised to coincide with the annual announcement on rail fare increases. They aimed to raise awareness about the benefits of renationalising what has become an overpriced, overcomplicated railway system.

ITF affiliates ASLEF, GMB, PCS, RMT, TSSA and Unite the Union organised the day of action which was supported by transport workers, community organisations, and the general public. Postcards were handed out at stations all over the UK, enabling members of the public to demand politicians act to create a re-unified national rail network, run for people not profit.

Mac Urata, ITF inland transport secretary, gave his strong support for the campaign. “The UK economy needs reliable and fairly priced transport to get the country moving. On top of the fare increases at a national level, there was news today at a local level that 6000 rail and tube jobs and all London tube offices will be cut. This will affect the safety of the capital’s transport system at a time when fares are increasing beyond the rate of inflation. Today, we back our affiliates in calling for sustainable economic investment in railways to benefit the many – not the few.”

Find out more about the campaign at http://www.bringbackbritishrail.org/news/ and http://actionforrail.org/public-ownership-for-our-railways-take-action/.

Extension of Border Operating Model deadlines is no...