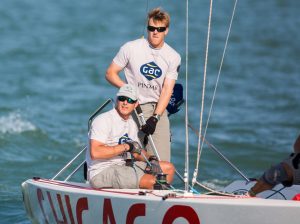 UK – 14 August 2013 – Ian Williams,  reigning Match Racing World Champion,  has extended his advantage at the top of the leaderboard in the 2013 ALPARI World Match Racing Tour with a fourth place finish in the Chicago Match Cup for Team GAC Pindar.

Ian led the 12-team field at the end of round-robin qualifying stage, with a 9-2 winning record to secure a quarter-final spot for GAC Pindar.  Ian went on to post a 2-0 victory against Pierre Antoine Morvan in Saturday’s quarter-finals, but lost out to Keith Swinton in the semi-finals.  Ian placed fourth overall following Sunday’s conclusion of the Petit Final, won by Sweden’s Bjorn Hansen. Despite not managing to defend the Chicago Match Cup title that he won in 2012, Ian’s fourth placed finish sees Ian extend his lead to nine points over his nearest rivals after four rounds of this six-race tour as he bids to defend his title and secure a historic fifth world crown.

Following the close of the competition, which was enjoyed by tens of thousands of spectators on Chicago’s famous Navy Pier, Ian commented: “We didn’t get the result we aimed for this weekend, but fourth place is still a strong result in the context of the overall tour standings.  We had a strong run through the qualifying sessions and the guys did a great job all week, but the margins between the teams are so slim at this level that the slightest error can prove costly.  There are plenty of positives for us to take away from Chicago though and the focus of our attention now will be on preparing for Bermuda.”

Andrew Pindar, Team Principal of Team GAC Pindar, added: “The Chicago Match Cup is always a fantastic event on the calendar and although Ian and the GAC Pindar team will be disappointed not to have defended their 2012 title, it was important that we were involved in the business end of the regatta in order to maintain Ian’s lead in the race for the world title. To extend his lead after four rounds of the tour is testament to Ian’s consistency this season and we’re looking forward to keeping up the momentum at the Argo Group Gold Cup in Bermuda.”

The next stop for the World Match Racing Tour is the Argo Group Gold Cup in Hamilton, Bermuda in October, before the season reaches its climax in December at the Monsoon Cup in Malaysia.

GAC Pindar is your first port of call for integrated specialist services for the marine leisure sector, including yacht transportation, superyacht services, air sea and road freight, yacht spares logistics, sailing event management, ship agency and corporate hospitality.  It is the winning combination of the global strength and resources of the GAC Group with the insider understanding of the yachting world represented by the Team Pindar professional sailing team.

Derek Prentis’ views on the industry in black and white!