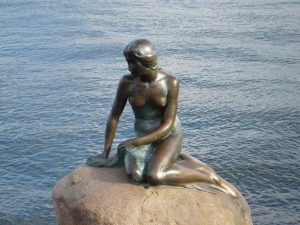 Perched on a rock in the water just off the star-shaped Kastellet fortress near the city’s harbour, the small bronze-skinned sculpture has become a Danish icon on a par with Carlsberg, the brewery once owned by the man who financed it.

Today, millions of children know the Little Mermaid from the Disney movie and the merchandise it spawned, but the original story lacks the happy ending of the animated film.

In the Danish saga, the mermaid rescues a prince at sea and falls in love, giving up her aquatic life to be with him on land.

However, to turn her fishtail into legs, she has to give up her voice, and speechlessly she watches her prince marry someone else. In sorrow, she throws herself back into the ocean and turns into foam.

Born in the central city of Odense, Andersen’s penchant for making the underdog the protagonist of his stories helped the tales spread around the world, said Per-Olof Mattsson, a lecturer at the Department of Literature and History of Ideas at Stockholm University
The story:
“The Little Mermaid” : It is called Den lille havfrue in Danish which translates to “the little sea lady”. It is a very well known fairy tale by the Danish author Hans Christian Andersen about a young mermaid willing to give up her life in the sea and her identity as a mermaid to gain a human soul and the love of a human prince.

The tale was first published in 1837 and has been adapted to various media including musical theatre and animated film..